#33Stories
No. 8: “The Work of Human Hands”
Context at the end of this excerpt.
Other entries in #33Stories at the Table of Contents. See you tomorrow!

Originally published in 1993 by Random House. 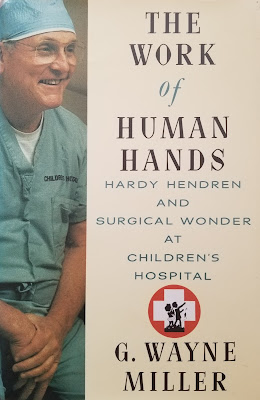 During the course of my writing career, I have been privileged to meet many extraordinary people, from many walks of life. Hardy Hendren belongs to a rare class. Measured by the good he has done for so many others, directly through his operations and indirectly through his teachings and the surgeons he trained (and the surgeons they have now trained), he ranks with another pioneer I knew and wrote about in my book King of Hearts: C. Walton Lillehei, remembered as The Father of Open Heart Surgery. A rare class, indeed: a class of two.

This new edition of The Work of Human Hands, which includes an updated Epilogue, remains a testament to Hardy’s impact on countless thousands of lives.
To that group, I must add my own.

As recounted in the Foreword, I met Hardy almost 25 years ago, when I was at a critical juncture in my development as a writer. I had published one book, Thunder Rise, a horror/mystery novel, and I had dreams of one day writing only fiction. My day job was staff writer at The Providence Journal, a newspaper published every day since its founding in 1829. Hardy welcomed me into his world and the book that resulted began my run as a non-fiction author –– a run that allowed me the freedom to continue my fiction and also to make movies.

But Hardy gave me something more valuable than a professional boost. He gave me reminders of the value of hard work and discipline; of the need for honesty, decency and charity; of the importance of family; and of the eventual rewards of perseverance, even when the going is protracted and tough, as writing, like life, often is. More than this, Hardy gave lasting friendship, along with did Eleanor, his lovely wife. He brought my three children into his circle (he is godfather to my son, Calvin). Hardy and I continue to share stories, laughs and joys (and a few sorrows). I sometimes turn to him for counsel, and he sometimes seeks mine. Some will say this crosses a journalistic line, but for every rule, there is an exception. This rule, I gladly break. So Hardy, my heartfelt thanks.

In preparing this edition of The Work of Human Hands with Crossroad publisher David N. Wilson (to whom I also owe a debt of gratitude), Hardy and I spoke repeatedly on the phone, and the emails went back and forth. On the eve of bringing his non-profit educational foundation to fruition, his gift to generations now and in the future, Hardy felt honored to have the book return to print. In one of his messages to me, he summarized the mutual sentiments that were forged so many years ago, when researching and writing the words on these pages. He wrote:

“I have always felt it was my good fortune that you came to see me with a book in mind!  From that came a great book and a very valued lifelong friendship. Any time the Millers would like to breathe the pure Duxbury air, come with the whole family.”

The invitation, as you might imagine, holds true on this end, too.

In my book (as it were), Hardy Hendren is the best.

Fate is a funny thing. I was a journalist by day and a horror/mystery/sci-fi writer by night (and early morning) when, in 1989, the year “Thunder Rise” was published, a young man who had worked briefly (and brilliantly) at The Providence Journal after graduating from Brown University contacted me. Jon Karp had taken a job as an editorial assistant at Random House. He said he had always liked my writing and wondered if I had any book ideas.

Jon did not want fiction. Did I have any non-fiction ideas?

I did: Dr. W. Hardy Hendren, the chief of surgery at Boston Children’s Hospital, a true surgical miracle worker. Jon liked that. “The Work of Human Hands” was the first book he ever bought – but hardly the last in his long and distinguished career. He went on to buy and edit three more of my non-fiction books at Random House -- and more recently he bought a fifth, “Top Brain, Bottom Brain,” co-authored with neuroscientist Stephen M. Kosslyn, as publisher of Simon & Schuster, the title he holds today. Jon took a chance on me in 1989 when there was little reason to – my single published book was horror! – and I remain grateful to this day.

The reviews for “The Work of Human Hands” were positive, including these glowing words from the Los Angeles Times. I remember vividly when Jon called with work of it – how excited he was: "Only rarely does a work of nonfiction equal or surpass the novel in the art of storytelling, the play of emotion and the sheer grandeur of human spirit. Alive! by Piers Paul Read was such a book. So was Bruce Chatwin's The Songlines and, more recently, Norman Maclean's Young Men and Fire. To this short list I must add The Work of Human Hands.''

The Chicago Tribune also liked the book, writing "Worshipful biographies of great surgeons are so common that one must really be special to merit attention. This one is.'' And how thrilling to receive my first review in The New York Times, with the Book Review stating “"Mr. Miller reminds us that in the hands of visionary and dedicated doctors, miracles still happen.''

Set at Boston Children’s Hospital, which U.S. News & World Report consistently rates as America’s best children’s hospital, THE WORK OF HUMAN HANDS is available now for the first time in digital format and a new paperback will also be available soon. The new edition includes a fresh introduction and a greatly expanded epilogue updating readers on Hendren and patient Lucy Moore today.

The central narrative remains an epic story of struggle against seemingly impossible odds as Hendren faces one of his biggest challenges: Lucy Moore, a fourteen-month-old girl born with life-threatening defects of the heart, central nervous system and genitourinary system. Before Hendren, surgeons regarded Lucy's condition as fatal.

But at the hands of master surgeon Hendren, she will go on to lead a normal life. And Hendren is aided in that quest by Aldo R. Castaneda, the pioneering cardiac surgeon, and R. Michael Scott, the internationally renowned neurosurgeon. Hendren, Castaneda and Scott are all affiliated with the Harvard Medical School.

“At a time when TV shows like Grey’s Anatomy and ER win huge followings for their stories, The Work of Human Hands stands out as a real-life medical drama with a cast of uniquely colorful characters,” said Crossroad publisher David N. Wilson. “We are thrilled to publish this new edition of the classic Work of Human Hands.”

Said author G. Wayne Miller: “At a time when health care dominates the public discourse, and rightly so, it’s refreshing to rejoice in the triumphs. American medicine truly can perform miracles.”

Today, the 14-month-old baby who spent nearly 24 hours on Hendren’s operating table is a college graduate, fully healed. Hendren performed his last surgery in 2004, when he was 78, but he continues to work full-time on his non-profit W. Hardy Hendren Education Foundation for Pediatric Surgery and Urology. He still receives some of the world’s most prestigious medical honors, most recently the Jacobson Innovation Award of the American College of Surgeons, in June 2012.

The publisher and author are donating a portion of the proceeds from this edition of The Work of Human Hands to the Hendren Foundation.