#33Stories: Day 18, "Since the Sky Blew Off," a screen treatment with Drew Smith

#33Stories
No. 18: “Since the Sky Blew Off,” a screen treatment with Drew Smith
Context at the end of this excerpt.
Other entries in #33Stories at the Table of Contents. See you tomorrow!
Writers Guild of American registration no. 1946967 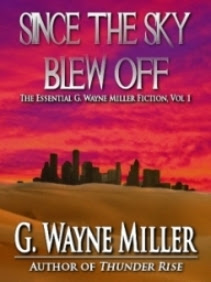 The movie opens with a catastrophic planet-wide natural disaster that destroys civilization as we know it, leaving a few “good” people and bands of savage Roamers who ruthlessly prey on them and each other…
Pickup midway through Act I:

The Dark Ages have settled on the world. A lawless landscape in which most traces of civilization are gone. No electricity, no Internet, no writing, no agriculture…

In this time, when the sky is mostly gone and CO2, methane and other gas levels are at dangerous levels, the atmosphere is poisonous. It affects health –– and mental health, progressively crippling the central nervous system and leading to loss of INDIVIDUAL MEMORY, minor at first but eventually terminal. The first, minor signs (forgetting where you left your keys, to use an example from our world) are in your teens; by your mid 20s, the signs are unmistakable (you begin to lose critical skills, such the ability to defend yourself against roamers); by 30, you are descending into senile dementia and in this eat-or-be-eaten world, you are eaten, by the younger generation. And if you somehow manage to survive, you are dead by 35, almost without exception. But there ARE exceptions – a few grizzled oldsters somehow survive, demented for the most part, wigged out, but alive (think of the lifelong chain-smoker who is still going strong at 80, rare as hell, but it happens).

Also lost is COLLECTIVE MEMORY. The memory of how life used to be in what is called “THE OTHER TIME” survives only in dribs and drabs of disjointed and unreliable oral stories and the occasional artifact that our protagonists will stumble upon in Act II (a burned-out movie theater, for example, or a wind-blown page of a book; think of the clues that CAVE ART give us today of our prehistoric ancestors).

No one celebrates the birth of a child –– it’s just a burden. In their savagery, many Roamers kill newborn babies, who are seen as a “drain’ on precious resources. (Think Chinese peasants drowning baby girls for real-life analogy.)

No one has the time or inspiration for any kind of creative ART –– no painting, no poetry, no books, nothing. NO ONE CAN READ.

Importantly, in light of how our main characters “come to life” in ACT III, no one LAUGHS any more. LAUGHTER seems to have been bred out of the species.

INT. FORTIFIED COMPOUND ON CAPE COD – AFTERNOON
MATHER, 30 years old, and RACHEL, 28 –– evidently a “couple” –– and two comrades, TRISTAN, 22, and SARAH, 23, live together in a crude shack near the shore. It is surrounded by rusty barbed wire, rocks, etc. It is cooler here than the interior, and the ocean, while poisoned, still produces (barely edible) fish, mainstay of the diet.
We see that Mather is mentally the slowest of the four –– he’s in the “forgetting where I put the keys” phase. Rachel is not, yet. Being younger, Sarah and Tristan are still sharp, and Rachel and Mather are increasingly relying on them to keep their shit together. They are especially valuable when defending the compound.
None of the four remember any longer how they came to be together –– prior to the previous four or five years, all is a blank. In other words, they have NO STORY.

INT. A NEARBY ROAMER COMPOUND – EVENING
A nameless female Roamer gives birth to a child. Male Roamers immediately kill it. This excites them. They whoop and holler and leave their compound, bent on destruction.

EXT. FORTIFIED COMPOUND ON CAPE COD – NIGHT
The Roamers attack the Rachel/Mather compound –– and this time, Tristan and Sarah are killed. Rachel and Mather barely escape with their lives and make their way on  a BICYCLE-BUILT-FOR-TWO (no more working cars or fuel) to BOSTON, in ruins…

EXT. BOSTON - DAY
As they behold the dead city, a flash of light atop the burnt-out John Hancock building catches their eye. Must be just the brutal sun, right, glinting off metal? Can’t be a person, can it? But it is –– it’s BIRDMAN, a grizzled, crazy man in his 70s beckoning them up. Rachel and Mather are leery. So Birdman sends down a carrier pigeon –– itself a startling development, as most birds have disappeared. The carrier pigeon has this message from Birdman:

I AM FRIENDLY. I HAVE FOOD. COME ON UP.
But the two cannot read the message, of course. But it’s obvious that they can’t read. Watching through binoculars, Birdman realizes this. He shouts down that he has “GOOD FOOD, YOU MUST BE HUNGRY” (and they are), his voice carrying in the dead air. Warily, Rachel and Mather enter the skyscraper.

INT. JOHN HANCOCK BUILDING – DAY
Up through the gloomy stairwells they go, questioning their judgment but so hungry they keep rising. As they get near the top, the encounter corpses of dead Roamers who have tried to get up here but were beaten back by Birdman.

EXT. JOHN HANCOCK BUILDING OBSERVATION DECK – DAY
Birdman opens a steel door and lets them in. The air here is fresher, one of the secrets to Birdman’s existence. We see a street sign: CROW TOWN. Birdman has written “OLD” on it so that it now reads OLD CROW TOWN.

This is a place of marvels for Rachel and Mather. Birdman has a bunch of tame crows, including a talking crow (who says “Got birds?”), and a few songbirds he has managed to keep alive and reproductive. Rachel and Mather have never heard a songbird –– and they are amazed and soothed. For Birdman, the birds have become a substitute for people. He can talk to his crows. His mourning doves speak to the sadness of the world. Songbirds speak to joy… etc.

And he has chickens –– they produce the eggs that are the mainstay of his diet. Birdman collects rainwater, which he uses to grow a few hardy crops (the air is better here, remember) that he uses to feed himself and his birds. Birdman offers the couple eggs, which they enjoy –– for the first time.

As they eat, Birdman spins a yarn (or is it true?). He claims to recognize Mather – that’s why when he spotted him through his binoculars he invited him up. Birdman has never met Mather, but he looks exactly like a dear old friend of his, a man named LEONARDO. Birdman says that surely Mather is Leonardo’s grandson –– how else to explain the stunning similarity?

Rachel and Mather are skeptical –– until Birdman shows him an old photo of Leonardo, before the sky blew off. The similarity is truly remarkable.

Birdman, in a shaman-like dialogue, claims that Mather’s arrival here has been pre-ordained. For just recently, a carrier pigeon arrived from Nordenland, to which Leonardo, a wealthy young man before the sky blew off, evacuated as civilization was dying. Rachel and Mather have heard rumors of this place, but until now believe it to be mythical, a sort of Nirvana that doesn’t really exist. Birdman shows the various messages the pigeons have brought: in summary, they claim that the earth’s atmosphere over Nordenland shows rising levels of natural O2, decreasing levels of CO2. Nature herself is responsible. (And our real-life planet earth has a long history of healing itself: returning from ice ages, for example; recovering from the massive meteor strike that killed the dinosaurs and paved the way for mammals to rule the planet; and regional recovery from the massive soot sent into the atmosphere by giant volcanic eruptions.)

Birdman speculates that this pristine air can actually reverse dementia. This is good news on an individual level, of course –– especially for Mather, who’s losing it rapidly –– and also on the larger level of hope for humanity.

Birdman is too old to make the trip –– he’s happy here, anyway, crazy with his crows. But he urges Rachel and Mather to go –– what do they have to lose? Birdman has a map. He also has an old Polaroid camera, still working, and he takes a picture of him with the couple. Photography is a further marvel for Rachel and Mather.

Along with the photo (which will show proof of the couple’s meeting with Birdman), Birdman writes a letter of introduction to Leonardo.

And so Rachel and Mather set off…

Of my many collaborations with Drew Smith, this may be my favorite -- and the lead, Birdman, one of my favorite fictional characters. It evolved from my short story of the same name, and over the many months we spitballed back and forth, we gave it varying names, “The Memory Bank” being one.
Yes, this is another dystopian work, and it rings a true today as when we wrote it a few years back – perhaps more so, as climate change continues to jeopardize the planet and the life forms that inhabit it (for now, anyway).

And humor me as I open the old writer’s trunk to reveal another screen project, much older than “Since the Sky Blew Off” – a completed full script for “Wishers,” which I completed more than a quarter of a century ago. Less dystopian than pure science fiction, it has flavors of early Spielberg. Herewith the first six pages. As you can see, this is literally from the trunk: 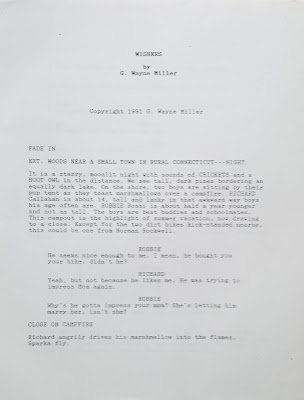 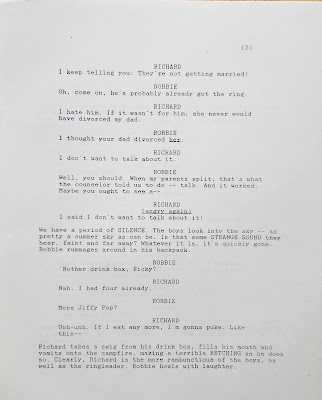 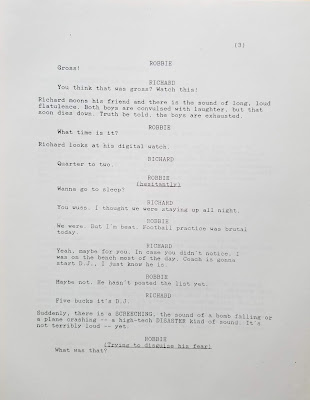 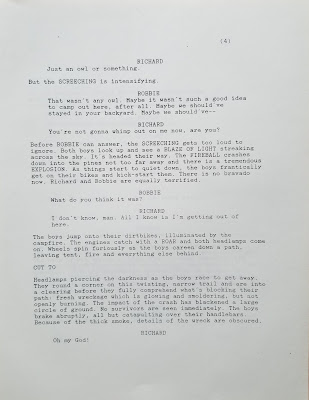 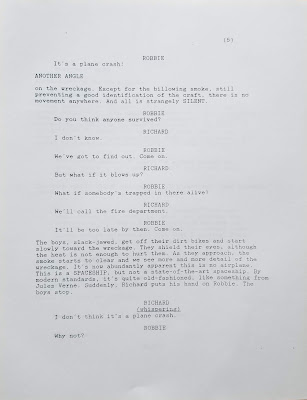 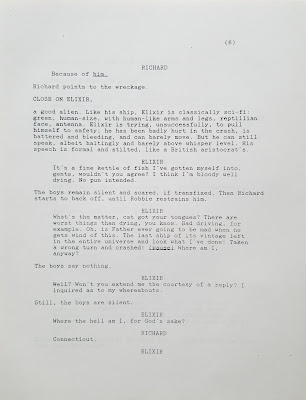