‘KID NUMBER ONE’ DELIVERS IN-DEPTH BEHIND-THE-SCENES LOOK
AT ALAN HASSENFELD AND THE WORLD OF TOYS,
POLITICS, PHILANTHROPY, AND HASBRO

PAWTUCKET, R.I. – Stillwater River Publications is pleased to announce publication of G. Wayne Miller’s KID NUMBER ONE: A story of heart, soul and business, featuring Alan Hassenfeld and Hasbro, the long-awaited sequel (and prequel) to Miller’s best-selling “Toy Wars: The epic struggle between G.I. Joe, Barbie and the companies that make them.”
An exclusive tour-de-force deep inside the world of toys, games, entertainment, Hollywood and national and local politics, KID NUMBER ONE, scheduled for publication on Sept. 24, 2019, will appeal to general readers and lovers of biography, history, business and philanthropy – and will be an indispensable addition to the chronicling of American culture.
A book launch and signing with Miller and former Hasbro CEOs Alan Hassenfeld and Al Verrecchia will be held from 3 p.m. to 5 p.m., Saturday, Sept. 28, 2019, at the Blackstone Valley Visitors Center, 175 Main St., downtown Pawtucket.
KID NUMBER ONE opens in 1903, when Alan Hassenfeld’s grandfather and great-uncle arrived in America as penniless teenage immigrants escaping religious persecution – refugees who went from hawking rags on the streets of New York City to building what became the world’s largest toy company, Hasbro, whose world headquarters is in Pawtucket.
Henry Hassenfeld, Alan’s grandfather, and Hillel Hassenfeld, Alan’s great-uncle, found their way to Rhode Island and by 1917 had founded Has(senfeld) bro(thers) on North Main Street in Providence. The company grew, becoming a national force when Henry’s son Merrill, Alan’s father, brought Mr. Potato Head and G.I. Joe to market. Merrill’s other son, Stephen, made Hasbro a Fortune 500 company and Hollywood player. Brother Alan was the free spirit who wanted to write novels, date beautiful women and travel the world. He never wanted to run Hasbro, and no one ever believed he would – or could.

And then Stephen died, tragically of AIDS. “Kid Number One,” as Alan liked to call himself, was suddenly chairman and CEO. Silencing the skeptics, he took the company to greater heights – and then almost killed it with a series of bad decisions including Hasbro’s acquisition of rights to POKéMON. Putting ego aside, Hassenfeld gave his long-time lieutenant Al Verrecchia command and set in motion a plan whereby he would leave the corner office. Verrecchia saved the company, and after renewed success, he himself retired, leaving Hasbro in the hands of current CEO and chairman Brian Goldner, so highly regarded that he was brought onto the board of CBS.
With his fortune, Hassenfeld could have sailed into the sunset on a yacht, but instead, he went to work expanding the long family tradition of Tikkun Olam – “repairing the world” – begun by his grandfather and great-uncle, who, grateful to have survived, tirelessly helped immigrants and needy citizens of their new country. Alan Hassenfeld’s philanthropy has helped build two children’s hospitals, establish numerous educational and health programs, train young doctors and scientists, resettle refugees, promote peace in the Mideast and more. For decades, he also has been a highly visible advocate for national political and ethics reform, despite personal threats and the scorn of crooked politicians.
KID NUMBER ONE weaves these stories into a seamless, dramatic narrative that begins with the slaughter of Jews in 1903 Poland and continues to today -- when in an era of unchecked narcissism and greed, Hassenfeld, like Bill Gates, serves as a model for what people of great wealth can do when they put self aside.
KID NUMBER ONE also chronicles the history of American toys -- and not just such Hasbro classics as Monopoly, Transformers and Star Wars, but also Mattel’s timeless brands including Barbie and many lesser-known toys by companies large and small, many no longer in existence. 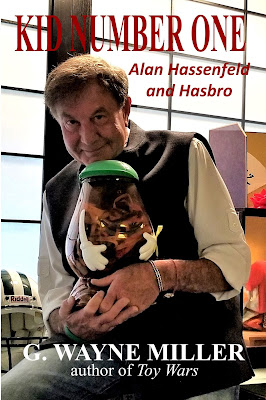 Early praise for KID NUMBER ONE:
“G. Wayne Miller reports like a demon and writes like an angel, and Kid Number One is a masterful example of his craft. In Miller’s hands, the story of Alan Hassenfeld’s quirky and ultimately selfless life adventure is an inspiration and a delight. It’s a special treat for readers who like their hard-edged business reporting leavened by celebrity guest appearances by Mr. Potato Head, G.I. Joe and the odd dollop of Flubber. A triumph!”
-- Washington Post senior correspondent Kevin Sullivan and author of the #1 New York Times bestseller “Hope: A Memoir of Survival and Cleveland.”

“Kid Number One is a compulsively readable and beautifully researched tour through one family’s impact on a world that has impacted us all: the toy industry. This is a unique and fascinating book.”
-- Daniela Lamas, author of the best-selling “You Can Stop Humming Now: A doctor’s stories of life, death and in between.”

“Combining family and corporate history, Kid Number One reveals the deeply personal family story at the heart of Hasbro's corporate identity. From family business to a cornerstone of American popular culture, G. Wayne Miller's history sheds light on the family and the values at the heart of one the globe's most recognizable brands.”
-- Julian C. Chambliss, historian, scholar and author of “Assembling the Marvel Cinematic Universe: Essays on the Social, Cultural and Geopolitical Domains.”

“Extensively researched, engaging collection of stories that follow the fortunes of one immigrant family... This is not, however, an unstinting eulogy - Miller unflinchingly discusses family strife and decisions that nearly proved disastrous to the business, even as he recounts the successes When we meet Alan Hassenfeld, we are shown the gentle humor that infused his life and work…
“Yet this is more than a mere historical account of one successful man, family, or company - it is also a set of stories that forces us to examine our current attitudes toward immigration; indeed, in the chapter ‘Reach for the Stars,’ Miller explicitly connects his retelling with the politics of today - and this honest questioning, taken together with his tenderly painted portrait of Alan Hassenfeld, a quiet, hard-working, ambitious and yet socially conscious entrepreneur and philanthropist who embodied the American Dream, will leave a lasting impression on the minds of readers.”
-- Padma Venkatraman, bestselling author of “The Bridge Home” and other best-selling books.

“Originally built upon the backbone of two immigrant brothers, take a journey with G. Wayne Miller and learn what truly defines the HASBRO name: Hassenfeld, Ambition, Success, Benevolence, Rhode Island, and Optimism. A must read for anyone who values family, creativity, and making a difference!”
-- Dan Klingensmith Jr., G.I. Joe historian and author of G.I. Joe books.

Read an excerpt from “Kid Number One”: www.kidnumberone.com

About the Author:
This is G. Wayne Miller’s 17th book. He is also a filmmaker, a podcaster, a Providence Journal staff writer, a visiting fellow at Salve Regina University’s Pell Center for International Relations and Public Policy, and co-host and co-producer of the Telly Award-winning weekly national PBS TV and SiriusXM Satellite Radio show “Story in the Public Square.”
Miller was a member of The Providence Journal team that was a finalist for the 2004 Pulitzer Prize for Public Service for the newspaper’s coverage of The Station nightclub fire that killed 100, and he has been honored for his work more than 50 times. His fiction and non-fiction books have won wide critical acclaim and been translated into several languages. Visit Miller at www.gwaynemiller.com

This passage is from Chapter Nine of "Kid Number One: A story of heart, soul and business, featuring Alan Hassenfeld and Hasbro." Eulogist Jehuda Reinharz, former president of Brandeis University, spoke at the funeral of Sylvia, Ala Hassenfeld's mother. The funeral was at Providence’s Temple Beth-El, not far from the home where Sylvia and Merrill raised him and brother Stephen.

Reinharz said he knew about Hassenfeld before meeting her in 1994, when he assumed the presidency of “a university with a lackluster board, among a long list of other problems”—and was told that if he could convince Sylvia, by reputation “a dynamo,” to join the board, many of those problems would begin to be resolved.

So taking a deep breath, he telephoned her.

“Come to see me next week at 4 p.m. at my apartment” in Manhattan, she said.

“I was served the customary Sylvia specialty of a small cup of coffee and two cookies,” Reinharz recalled. “And I made my case.”

He had never met any potential donor, Reinharz said, who was “as straightforward as Sylvia. She did not play coy.”

Who was on the board? she asked. Who will survive and who will be sacrificed? What would my role be?

“She was not going to be a decoration or a symbol of gender diversity,” Reinharz said. “I told her I expected her to make financial contributions and help me build up the rest of the board. Sylvia agreed on the spot with the following brief sentence: ‘I will join the board and I will support you.’ And she was true to her word. So began a most wonderful relationship between one of the most remarkable women of our generation and a grateful new university president.”

Hassenfeld’s many philanthropic passions impressed Reinharz. “Her energy was boundless,” he said. “I was incredulous about the travelling she did.”

“Yes, she also lived very well,” Reinharz said. “She loved to dress well, eat well, laugh at good jokes, and she could have fun playing bridge with the best of them. On the other hand, she disliked pretentious people who took themselves seriously.”


Reinharz drew knowing laughter in his descriptions of Hassenfeld’s mannerisms and style. “Despite her endless travel schedule,” he said, “Sylvia never missed a board or committee meeting. She sat at the meetings like a queen, never wearing the same outfit twice. She had read all the materials sent to her beforehand, was well informed, and had a no-nonsense attitude.”

He related how Hassenfeld and fellow board member Ann Richards, former governor of Texas, formed a powerful duo in accomplishing his agenda. Before meetings, he said, “I would tell them exactly what I wanted, and they would literally intimidate the board into passing my agenda. Sylvia simply said, ‘Here is what I think. And here’s what needs to be done.’ And Ann Richards would chime in and say immediately afterwards, ‘I totally agree, let’s vote.’ And that was it… No one on the board wanted to cross these two women.”

In closing, Reinharz put humor aside for respectful tribute.

“Obviously, Sylvia was a woman of great wealth, who, like many of her generation, could have spent her life in leisure activities, writing the occasional large check and feeling good about it,” he said. “But Sylvia chose a different path. She did not just write checks. She did the work. She got involved in every aspect of the organizations she worked for; talked to everyone, rich and poor; prime ministers as well as the most powerless and vulnerable people in our society. She traveled tirelessly throughout the world trying to improve the lives of less fortunate individuals and communities.”

He could have been describing her son.

“She teaches us that with privilege come obligations and opportunities,” Reinharz said. “Not many people can say that they have changed the world for the better. I believe Sylvia is one of those who truly has. We will all miss her very much. May her memory be a blessing.”