I periodically review books for The Providence Journal. Here are two recent ones: 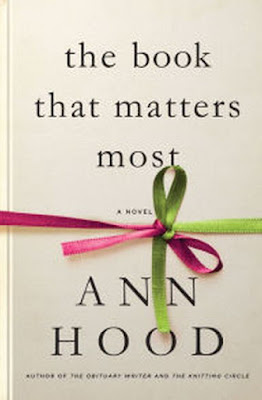 In “The Book That Matters Most,” Ann Hood has given us a remarkable musing on memory, loss, regret and, to an extent, redemption and salvation. She does so with elegant prose and gentle but appropriate tugs on the heartstrings. The sentiments of the characters ring true. We know these people. You or I may be one of them.

Hood’s latest is told primarily through the alternating perspectives of middle-age Ava; her daughter Maggie, a college student spending a year abroad; the (now) retired police detective Hank; and, toward the end,

Set partly in Providence, where Hood lives, the novel opens as longtime husband Jim has just announced his surprise intention to divorce Ava (falling, pathetically, for a hippy-dippy yarn-bomber). Reeling, doubting herself, uncertain how or if she will survive emotionally, Ava joins a book club which has decided that members will announce their most important book, each of which will be discussed in meetings over the year. The list is revered, if predictable: “Catcher in the Rye,” “Anna Karenina,” “The Great Gatsby” and other classics. Ava chooses “From Clare To Here,” a long-out-of-print book by an obscure writer whose name does not get even a single Google hit. Not until the final pages do we learn why.

Hood interweaves her many plotlines flawlessly, and is most masterful when she takes the point of view of Ava and wayward Maggie, whose overseas adventures spiral into anonymous sex and opioid addiction in Paris and elsewhere. It is disturbing to read, particularly if you are a parent — but spot-on. Having written about addiction for The Journal, I can tell you that Hood has captured its destructive tyranny in a way that nonfiction often adequately cannot.

“The Book That Matters Most” suffers slightly from a few novelistic contrivances, notably the one that closes the novel (although a romantic would surely root for just such an ending, and if a movie results, as it should, Hood made the right choice). But these are minor objections, which do little to diminish the heft of this depiction of vividly rendered people.

So what book really matters most? Not the one with Holden Caulfield or Jay Gatsby, of course, as Hood’s tale confirms. It’s your own: your story, the one by and about you, the one that is being written every day you draw breath, and for years after.

“The burden, the weight, of memories,” as one of this book’s minor characters puts it, are inescapable. And as Ava and her cohorts know painfully, they endure. But while we are here, they need not define or control, which is the welcome truth of “The Book That Matters Most.”

—Staff writer G. Wayne Miller is the author of 16 nonfiction and fiction books, most recently “Car Crazy: The Battle for Supremacy between Ford and Olds and the Dawn of the Automobile Age.”


Remarkable voice for victims of injustice | ‘The Boys in the Bunkhouse: Servitude and Salvation in the Heartland,’ by Dan Barry. Harper. 352 pages. $26.99. 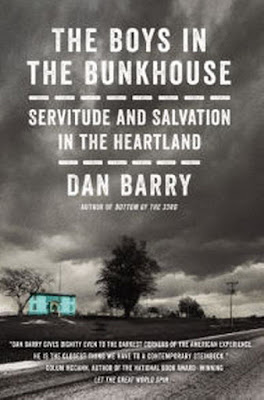 In “The Boys in the Bunkhouse: Servitude and Salvation in the Heartland,” New York Times staff writer Dan Barry has achieved the remarkable. He has written an unforgettable story of degradation, suffering, and eventual triumph rendered in a velvet style that blends poetry with colloquialism.

He has given powerful voice to intellectually disabled people — and, by extension, all people with vulnerabilities. He has told us something vitally important about us, all of us, regardless of label or life station.

The bunkhouse is a former school building in the small Iowa town of Atalissa where 32 formerly institutionalized developmentally disabled men — the “boys” — lived as virtual slaves behind plywooded windows in squalid conditions during the decades they worked at a nearby turkey processing plant. Their jobs punished body and soul. Their wages, such as they were, were essentially stolen by their boss. They were physically and emotionally abused and neglected, their lives stolen.

When their situation finally was brought to full public light by a crusading newspaper reporter, even the veteran social workers and others who took action were horrified. The bunkhouse was closed, in 2009, and the men transitioned into new circumstances, where they could be people, not slaves. Triumph, finally.

Yet, there was more to the story: for example, the brotherly fraternity and the touches of affection, if not love, amid the squalor and abuse that another writer might have ignored in building a justifiably damning case. Also, the feel of the quiet Plains community and its proud history. And the townspeople who welcomed the boys not knowing what really went on when they retreated to their house of horrors. And the house itself, which opened its doors annually for a Christmas party that was the antithesis of existence the other 364 days. Barry found and presents these and other nuances, in which can be found larger commentary about our shared humanity.

Barry set aside the ordinary rules of nonfiction narrative in deciding to bring us inside the heads of his many characters, developmentally disabled and not. Attempting such a high-wire act is a dangerous proposition for even an accomplished writer, but Barry needed no net.

With his command of inner voice, we come to know Levi, the “boy” who had a knack for quieting birds before slaughter; Raymond Vaughn, who has no memory of his parents though a dim one of abandonment before he wound up in an institution; Texan T.H. Johnson, the seemingly heartless boss who actually did have heart, of a sort; Ed George, the social worker who sounded an alarm in 1974 that tragically was ignored. And many more.

The net result is an extraordinary contribution to the literature of social injustice. In his years at The New York Times, Barry, twice a finalist there for the Pulitzer Prize and once a member of a Providence Journal team that won one, has written extensively of social issues, of servitude and salvation of many kinds.

Barry has written three other books: “City Lights,” essays about New York; “Lift Me Up,” a memoir; and “Bottom of the 33rd,” about baseball’s longest game, won by the Pawtucket Red Sox. All fine books, but his latest overshadows them all. We still have months to go in 2016, but “The Boys in the Bunkhouse” surely will emerge as one of the landmark books of the year.

To hear Barry discuss “The Boys in the Bunkhouse” and his other writing, watch an episode of “Story in the Public Square TV,” a monthly feature of the national PBS show White House Chronicle: whchronicle.com/?p=3265

—Journal staff writer and “Story in the Public Square” director G. Wayne Miller is the author, most recently, of “Car Crazy: The Battle for Supremacy between Ford and Olds and the Dawn of the Automobile Age.”