Big-screen premiere of BEHIND THE HEDGEROW director's cut! 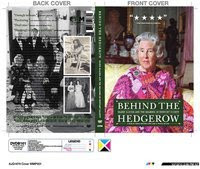 After a successful August premiere and month-long run at the Pickens, filmmakers David Bettencourt and G. Wayne Miller returned to the editing booth to add about five minutes of superb footage that premiere deadlines prevented. The result is the director's cut, which is included on the deluxe DVD (along with extensive bonus footage) -- and it will be shown at Newport's Jane Pickens Theater at 3 p.m. on Sunday, Nov. 14, for the first time.

Participants will not only see the new cut -- they will each receive a DVD and, while supplies last, a movie poster, all for the price of admission. And, they will get to meet Miller, Bettencourt, associate producer Calvin Miller, and, possibly, members of the Slocum family and others in Newport Society.

For more information, visit the Jane Pickens site.
Posted by G. Wayne Miller at 6:50 AM No comments:

After successful showings at the 2010 Rhode Island International Film Festival, in August, and just this month at the inaugural FLICKERS North Country Film Festival, we are looking at a select few additional festivals to show Hedgerow. We were asked to submit the film to Big Sky, one of the nation's premiere documentary fests, and we hop to be an official selection.
Meanwhile, the director's cut DVDs -- a longer version of the movie, with bonus footage -- should arrive from the manufacturer in less than two weeks. Order the DVD here!
Posted by G. Wayne Miller at 9:53 AM No comments:

Having completed a successful month-long run at Newport’s Jane Pickens Theater, the critically acclaimed BEHIND THE HEDGEROW: Eileen Slocum and the Meaning of Newport Society is now headed to DVD –– with bonus footage of scenes and interviews not in the theatrical version.

“We made a movie of just under 60 minutes, which means that we left hours and hours of great material on the proverbial cutting-room floor. Now the best of that will be available to the viewing public,” said producer G. Wayne Miller.

Among the bonus features: footage of Yusha Auchincloss talking about growing up with his step-sister, Jackie Kennedy Onassis; Betty "Boop" Blake with more detail on her mother, who survived the sinking of The Titanic; and historian Michael Budd with more on the history of Newport's mansions.

The deluxe DVD will be available in late October, but preorders are being accepted now at the Hedgerow order page.

BEHIND THE HEDGEROW premiered in August 2010 as the opening-night feature of the 2010 FLICKERS: Rhode Island International Film festival. It received four stars from The Providence Journal, and was called “shockingly refreshing and funny” by Newport Mercury, “daringly intimate” by Newport Patch, “fascinating” by NPR Morning Edition and “don’t miss” by Rhode Island Monthly.

BEHIND THE HEDGEROW, from Emmy-nominated filmmakers director David Bettencourt and Miller, is an unprecedented look inside the private world of Newport, Rhode Island, High Society –– a world whose roots lie in the Gilded Age of Vanderbilts and Astors.

BEHIND THE HEDGEROW is the second title from Eagle Peak Media, the production company founded in 2008 by Miller and Bettencourt. ON THE LAKE, EPM’s first title, premiered in February 2009 and has been broadcast in PBS markets across America It was nominated for an Emmy by the New England chapter of the National Academy of Television Arts & Sciences.
Posted by G. Wayne Miller at 7:43 AM No comments: