Opportunities abounding now and in the future for media and in-person appearances for CAR CRAZY.

This weekend, Dec. 19 and 20, C-SPAN2 Book TV re-broadcast my talk about writing and the early days of the auto industry that was first broadcast on December 14. The broadcast was from the taping of the book launch party to a full house at the Pell Center in Newport, Rhode Island, last month. View the broadcast.

Also this weekend, the national PBS show White House Chronicle aired my discussion of the birth of the automobile, the revolutionary nature of Henry Ford's Model T, and more with host LLewellyn King. The episode was also on Voice of America Television and Sirius XM Radio's Channel 124. King said, and I thank him: "Absolutely extraordinary... Get this book! Fascinating."

Coming soon: a podcast about the cultural & economic impact of the motor vehicle, with Pell Center head Jim Ludes asking the questions. I am a center fellow & director of the Story in the Public Square program.

I will sign books and present a seminar, "Barney Oldfield, Henry Ford and the Birth of American Auto Racing," at the annual meeting of the Antique Automobile Club of America, the nation's leading classic- and vintage-car group. The meeting will be held in Philadelphia the weekend of Feb. 11, 2016. Come join us!

There is much more to come, of course, as we continue to schedule events. Among the places we have been already:

-- Drive Thru Radio, AM-790, Providence, with the Zangari brothers.

-- The launch party in Newport, R.I., where we had four classic cars, each more than 100 years old, running and giving rides. Watch great video of the cars in action.

My Dad and Airplanes

Author's Note: I wrote this three years ago, on the occasion of the tenth anniversary of my father's death. Like his memory, it has withstood the test of time. I have slightly updated it for today, December 11, 2015, the 13th anniversary of his death. Read the original here.

My Dad and Airplanes
by G. Wayne Miller

I live near an airport. Depending on wind direction and other variables, planes sometimes pass directly over my house as they climb into the sky. If I’m outside, I always look up, marveling at the wonder of flight. I’ve witnessed many amazing developments -- the end of the Cold War, the advent of the digital world, for example -- but except perhaps for space travel, which of course is rooted at Kitty Hawk, none can compare.

I also always think of my father, Roger L. Miller, who died 13 years ago today.

Dad was a boy on May 20, 1927, when Charles Lindbergh took off in a single-engine plane from a field near New York City. Thirty-three-and-a-half hours later, he landed in Paris. That boy from a small Massachusetts town who became my father was astounded, like people all over the world. Lindbergh’s pioneering Atlantic crossing inspired him to get into aviation, and he wanted to do big things, maybe captain a plane or even head an airline. But the Great Depression, which forced him from college, diminished that dream. He drove a school bus to pay for trade school, where he became an airplane mechanic, which was his job as a wartime Navy enlisted man and during his entire civilian career. On this modest salary, he and my mother raised a family, sacrificing material things they surely desired.

My father was a smart and gentle man, not prone to harsh judgment, fond of a joke, a lover of newspapers and gardening and birds, chickadees especially. He was robust until a stroke in his 80s sent him to a nursing home, but I never heard him complain during those final, decrepit years. The last time I saw him conscious, he was reading his beloved Boston Globe, his old reading glasses uneven on his nose, from a hospital bed. The morning sun was shining through the window and for a moment, I held the unrealistic hope that he would make it through this latest distress. He died four days later, quietly, I am told. I was not there.

Like others who have lost loved ones, there are conversations I never had with my Dad that I probably should have. But near the end, we did say we loved each other, which was rare (he was, after all, a Yankee). I smoothed his brow and kissed him goodbye.

So on this 13th anniversary, I have no deep regrets. But I do have two impossible wishes.

My first is that Dad could have heard my eulogy, which I began writing that morning by his hospital bed. It spoke of quiet wisdom he imparted to his children, and of the respect and affection family and others held for him. In his modest way, he would have liked to hear it, I bet, for such praise was scarce when he was alive. But that is not how the story goes. We die and leave only memories, a strictly one-way experience.

My second wish would be to tell Dad how his only son has fared in the last 13 years. I know he would have empathy for some bad times I went through and be proud that I made it. He would be happy that I found a woman I love, Yolanda, my wife now: someone, like him, who loves gardening and birds. He would be pleased that my three children are making their way in the world, and that he now has three great-granddaughters, wonderful girls all. In his humble way, he would be honored to know how frequently I, my sister and my children remember and miss him. He would be saddened to learn that my other sister, his younger daughter, Lynda, died this year. But that is not how the story goes, either. We send thoughts to the dead, but the experience is one-way. We treasure photographs, but they do not speak.

Lately, I have been poring through boxes of black-and-white prints handed down from Dad’s side of my family. I am lucky to have them, more so that they were taken in the pre-digital age -- for I can touch them, as the people captured in them surely themselves did so long ago. I can imagine what they might say, if in fact they could speak.

Some of the scenes are unfamiliar to me: sailboats on a bay, a stream in winter, a couple posing on a hill, the woman dressed in fur-trimmed coat. But I recognize the house, which my grandfather, for whom I am named, built with his farmer’s hands; the coal stove that still heated the kitchen when I visited as a child; the birdhouses and flower gardens, which my sweet grandmother lovingly tended. I recognize my father, my uncle and my aunts, just children then in the 1920s. I peer at Dad in these portraits (he seems always to be smiling!), and the resemblance to photos of me at that age is startling, though I suppose it should not be.

A plane will fly over my house today, I am certain. When it does, I will go outside and think of young Dad, amazed that someone had taken the controls of an airplane in America and stepped out in France. A boy with a smile, his life all ahead of him.
Posted by G. Wayne Miller at 2:53 AM No comments:

VIDEO: More classic cars in action. PLUS: another great review by a car lover!

At the bottom of this post, you will find links to more classic cars, including 1 1904 Oldsmobile and a 1912 Packard, running at the launch party for CAR CRAZY. Fun stuff!

First though, a glowing endorsement from Just a Car Guy, aka Jesse Bowers, who writes, in part that CAR CRAZY “Does the best job of teaching you everything about the 1st decade of American car-making (1900 – 1910) that I think we are ever likely to get. If you want to learn how the Ford, Olds, Reo, Chevrolet, Buick and GM got started, this book is indispensable. It’s really that good.”


And here are the videos -- quick views, definitely worth the quick clicks! 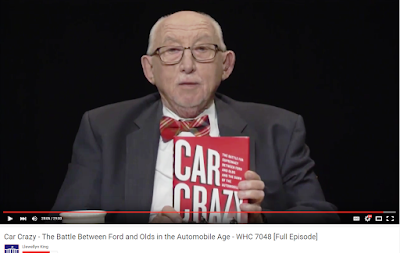 Spent a wonderful half hour talking old cars -- and new cars -- and looking at photos of same -- with the distinguished LLewellyn King, host of the national PBS Show White House Chronicle, which is also broadcast on AMG TV, and worldwide on Voice of America Television and Sirius XM Radio's Channel 124. Llewellyn, whose car days go back to his father's Ford Model A, was kind enough to praise Car Crazy, calling it "Absolutely extraordinary... Get this book! It is very, very readable. Fascinating." You can watch the episode here or watch for it to be be-broadcast soon.

And on a related note, the Newport Mercury on December 2, 2015, published a nice story about the book (and the writing of it). "Fascinating," the weekly wrote. "It was a time of off-the-wall characters, eager-to-corner markets and run competitors off the road. We meet the ruthless Frederic Smith, the CEO of Olds Motor Works, and, of course, Ford." Read the story.

Scenes from a signing

Spent a fine hour and a half at Barrington Books Retold in Garden City, Rhode Island, on Sunday, November 29. A great store run by great people -- and we pulled in many Car Crazy folks. Of course, having Viv, my beautiful baby granddaughter, on hand was really the trick to interesting buyers!

Learn more about the rest of my books, non-fiction and fiction, at Gwaynemiller.com
Posted by G. Wayne Miller at 3:16 AM No comments: