I am thrilled to announce that Amazon Originals is developing a limited series based on my book Toy Wars: The Epic Struggle Between G.I. Joe, Barbie and the Companies That Make Them, an inside look at the toy industry and the battle between Hasbro and Mattel in the 1980s and ‘90s. I will be an executive producer on the show.

The whole thing came together thanks to the long efforts of my longtime screen agent and friend, Michael Prevett, whose Rain Management Group/StoryBy will executive-produce. Michael has kep[t the faith and my gratitude to him! 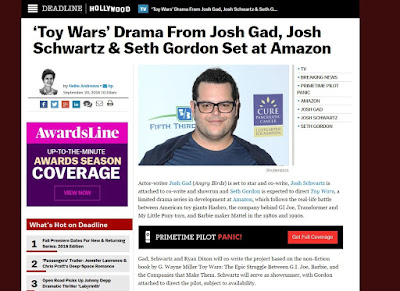 The trade announcement was in Deadline Hollywood/Variety, which wrote: "Actor-writer Josh Gad (Angry Birds) is set to star and co-write, Josh Schwartz is attached to co-write and showrun and Seth Gordon is expected to direct Toy Wars, a limited drama series in development at Amazon, which follows the real-life battle between American toy giants Hasbro, the company behind GI Joe, Transformer and My Little Pony toys, and Barbie maker Mattel in the 1980s and 1990s.

"Gad, Schwartz and Ryan Dixon will co-write the project based on the non-fiction book by G. Wayne Miller Toy Wars: The Epic Struggle Between G.I. Joe, Barbie, and the Companies that Make Them. Schwartz will serve as showrunner, with Gordon attached to direct the pilot, subject to availability."