A writer's (20) places, at a place called Spot Undergound

I will be discussing some of the places my fiction and non-fiction writing has brought me at Spot Underground, the arts and music place in Providence's historic jewelry/knowledge district. Wednesday evening, Nov. 30 as part of PechaKucha Night Providence Volume #32. Twenty slides, 20 seconds each, an entire enjoyable evening with me and several other people from the creative world.
Posted by G. Wayne Miller at 12:41 PM No comments:

Talk, reading, and wine and cheese at The Redwood

Please join me this Thursday, Nov. 17, at the Redwood Library in Newport for a talk and reading from AN UNCOMMON MAN: The Life & Times of Senator Claiborne Pell. 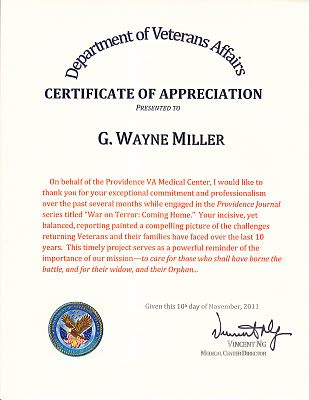 As part of the VA's Veterans Day ceremonies, Providence Journal colleague John Freidah and I spoke today at the Providence VA Medical Center, where we have been regular visitors for almost half a year as we put together our eight-part series about veterans of the post-9/11 conflicts, WAR ON TERROR: Coming Home. The series, which included five videos, wrapped Monday. In addition to our remarks, we showed the final video, about two Bronze-Star winner Derek Pelletier. Some in the audience of about 100 cried.

It was indeed a powerful ceremony, a tribute to veterans and for John and me, a fitting cap to our efforts.

And then, a surprise: Citations from the VA in recognition of our work. I cannot tell you how honored I was. I have won many awards in my many years a journalist, but this ranks above them all.
Posted by G. Wayne Miller at 2:45 PM No comments:

The War on terror series wraps up with... 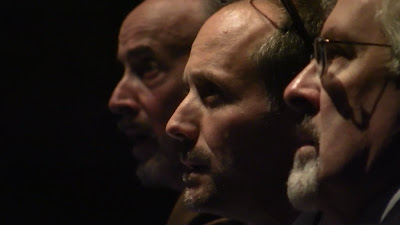 ... The Providence Journal's Publick Occurrences forum Monday, Nov. 7, at Rhode Island College. This is a photo from the event of me with my Journal colleagues columnist Bob Kerhttp://www.blogger.com/img/blank.gifr, left, and photographer/videographer John Freidah. And here is a video from the evening.

Videos and stories from the eight-part series can be found here.
Posted by G. Wayne Miller at 2:37 PM No comments:

Meanwhile, the first of the final two videos accompanying the series is now posted on the Journal War on terror series site. It is especially powerful: The story of a father who lost his firstborn son in an explosion in Afghanistan.

Powerful, too, is the video accompanying the final story, in Monday's paper, about a soldier who won two Bronze Stars -- and came home to a military that initially neglected him, despite his extreme PTSD. That video will be posted later this weekend.

Once we are done, five videos will have been produced, and eight main stories, many with sidebars, written. It has been a long and exhausting few months getting this done. Imagine having to live through what these brave men and women did, and still do...
Posted by G. Wayne Miller at 8:09 AM No comments:

With three decades in journalism, I can authoritatively state that public praise from a colleague is rare. And so I was humbled by longtime Providence Journal columnist Bob Kerr's praise for my post-9/11 veterans series published in the Journal today.

It is especially humbling, given Bob's service in Vietnam as a Marine -- and for years here, the voice of veterans of all ages. Bob also graciously also acknowledged the incredible videos by staff photographer John Freidah, wonderfully edited by Cecilia Prestamo, that accompany the series.

Series wraps up with Part Seven this Sunday and Part Eight on Monday, this Veterans Week. Two extraordinary stories (credit due the subjects I profile!), accompanied by two more extraordinary videos.
Posted by G. Wayne Miller at 11:39 AM No comments: