In the days leading up to tonight's Rhode Island PBS broadcast premiere of the documentary, we've received lots of continued great coverage. Having been around (and in) the media for many years, I know it doesn't come gratuitously (or every day). And so thanks to the critics and reviewers who have said such nice things.

This review especially, in today's examiner.com Providence, was appreciated.

Critic Brandon Akers wrote, among other things: "The filmmakers’ passion for storytelling bleeds through every scene as the historical narrative unfolds. Through a series of vintage still photography, perfectly restored stock footage and live interviews, they masterfully capture every detail of this revered local culture. The filmmakers’ artful transitions, skilled scene framing and mindful scoring make for a heart felt telling of local history."

Thanks, Brandon, and all others who have been so kind.
Posted by G. Wayne Miller at 8:18 AM No comments: 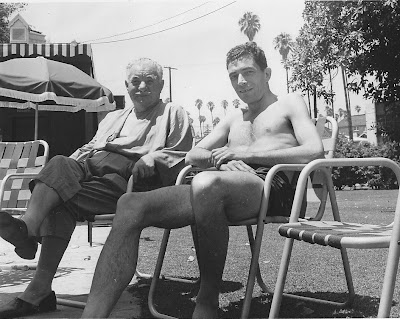 As I comb through Pell's personal scrapbooks and other sources, I am adding new photos to the UNCOMMON MAN web site. I have almost 60 up there now, all nicely organized and captioned, with many, many more to come.
Here's a rare shot of the Pell in swim trunks, from the 1960 campaign year.
Check the rest of them out at the UNCOMMON MAN slideshow.
Posted by G. Wayne Miller at 3:56 AM No comments: