We learned last night that COMING HOME,  which already this year has won a 2012 Edward R. Murrow Award, has been nominated for a 35th New England Emmy by the regional chapter of the National Academy of Television Arts & Sciences. We are one of six films nominated in the Outstanding Documentary category. Winners will be announced at a banquet June 2 at the Marriott Boston Copley Place. A list of all nominees can be found at the New England chapter page.

Once again, our gratitude to the veterans who appeared in this film, sharing painful stories in the hope it would help others -- and to the Rhode Island National Guard and the Providence VA Medical Center, which opened their doors to photographer John Freidah, editor Cile Prestamo and me for the second half of last year. Add narration by columnist and Marine Vietnam veteran Bob Kerr, and the film was complete.

With our in-house Providence Journal documentary production team firmly established now, we continue to move into projects with social significance and public-service value. 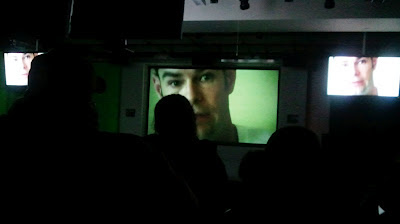 Sunday’s kickoff to the seventh annual Roving Eye Film Festival at Roger Williams University was a fine success. We had a crowd of more than 100 for the showing of three war films: The 2011 Oscar-nominated short KILLING IN THE NAME, an extraordinary film; INCIDENT IN NEW BAGHDAD, the powerful 2012 Academy Award-nominated short; and The Providence Journal’s Edward R. Murrow Award-winning COMING HOME. I had never seen COMING HOME on the big screen or in an auditorium, and it was quite remarkable witnessing the whole audience, including several veterans, sit in a sort of solemn mesmerized silence at the end. I don’t know how else to put it. The combined impact of the three films was very powerful. Festival director George Marshall and his students did a great job in selecting the lineup.
INCIDENT IN NEW BAGHDAD director James Spione traveled from New York to show and discuss his film, and we enjoyed hearing him -- and later talking with him after about filmmaking in general and his current project, which sounds outstanding. Also on hand were two of the principal veterans in COMING HOME: John DiRaimo and Sean Judge, who came with his new comfort dog. Family members came, too.

After an introduction from RWU president Donald J. Farish, I then moderated a panel discussion with: Lt. Col. Denis Riel, Director of Staff for the Rhode Island Air National Guard, twice deployed in the War on terror; Dr. Jonathan Shay, clinical psychiatrist and author; Frank DiCataldo, assistant professor of psychology at Roger Williams; Coleman Nee is Secretary of the Massachusetts Department of Veterans' Services -- and a Marine Corps veteran of Operation Desert Storm; and my good friend and colleague, Journal photojournalist John Freidah, who made COMING HOME with me and editor Cile Prestamo, and my partner in documentaries now-in-progress at the projo.

Given that we co-sponsored the day, perhaps it is no surprise that we somehow managed to have Providence Journal Staff Writer Mark Reynolds cover the event for today's edition of The Journal!

Next up for COMING HOME will be a featured block at this summer’s Rhode Island International Film Festival, the second week of August. Our block will feature a number of Providence Journal documentarians and their work as we explore new media from “old-fashioned” newspapers. See you there!
Posted by G. Wayne Miller at 3:42 AM No comments: 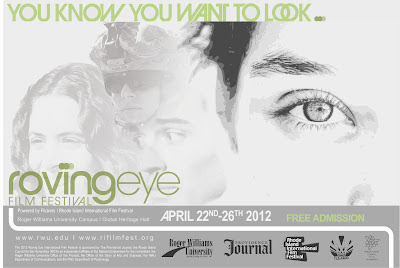 The feature film of the afternoon will be The Journal's first documentary, the 2012 regional Edward R. Murrow Award-winning COMING HOME, about veterans of the wars in Iraq and Afghanistan.

Please join us at the Roving Eye Film Festival April 22 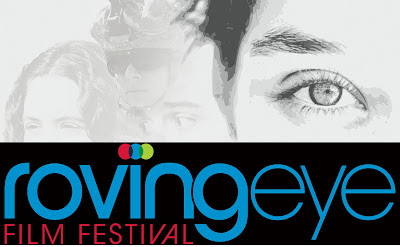 The public is invited to COMING HOME: THE HUMAN FACE OF WAR, a free afternoon of documentaries and discussion on Sunday, April 22, that kicks off the seventh annual, four-day Roving Eye Film Festival at Roger Williams University's main campus in Bristol, R.I.

Two Academy Award-nominated short films will be shown: INCIDENT IN NEW BAGHDAD and KILLING IN THE NAME. That will be followed by a screening of The Providence Journal's 2012 Edward R. Murrow Award-winning documentary COMING HOME, about veterans of the wars in Iraq and Afghanistan. We will honor two Rhode Islanders recently killed in Afghanistan, along with all veterans.

The day begins at 2 p.m. with the showings of the two short films -- and INCIDENT IN NEW BAGHDAD director James Spione will be on hand to introduce and discuss his film. COMING HOME screens at 4 p.m., follwoed by the panel discussion lasting an hour or so. The day concludes with a reception.
Posted by G. Wayne Miller at 4:46 AM No comments:


On a warm spring day, with trees leafing and flowers blooming, a day he would have loved, Pete Lord was remembered this afternoon in a service at the University of Rhode Island. Several hundred people from many walks of life came, a tribute to this fine man who will be long remembered.

Presented today at an American History class at Newport's Salve Regina University, where the Pell Center is located. This was to a group of about 30 Pell Scholars. Had a great time. The topic was how I researched and wrote  AN UNCOMMON MAN, my bio of the late Sen. Claiborne Pell. Invested a lot of time combing my files for the PowerPoint and it was worth the effort. The book was required reading for the course, and afterward I signed everyone's copy. A room of bright young scholars and I wish them the best. And thanks to professor and historian Marian Mathison Desrosiers.

I am always delighted to spend time at Salve. They have been supportive of my work for years, and last fall's UNCOMMON MAN book launch at the Pell center (where else?!) remains a very pleasant memory. 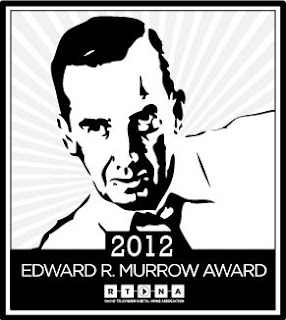 Spoke to a good crowd for an hour and a half Wednesday night at the North Kingstown Free Library's Rhode Island Voices program. Katy joined me and said she enjoyed it, too!
Posted by G. Wayne Miller at 6:30 AM 1 comment:

The Frank Beazley Building, the series back online


Those who know me know my long admiration and deep respect for Frank Beazley, poet, artist, champion of the disabled, and now 45-year resident of Zambarano Hospital. On Wednesday, Frank came with some other Zam patients and staff to the Rhode Island State House, where he was honored -- again -- this time for having the main patient building at Zam named for him. Frank thus joins former governors Garrahy and Sundlun in having a building named for him. It is a very rare honor, and one so well-deserved.

I wrote about this in today's Providence Journal.

And in advance work for the story, I managed to find the right editors internally who were able to restore my 12-part 2006 series on Frank, THE GROWING SEASON. This series was the inspiration for the documentary I co-produced and scripted, ON THE LAKE: Life and Love in a Distant Place, which begins with Zam's early days a a TB sanitarium.

Read THE GROWING SEASON and listen to Frank through this link.

There will be a public memorial service for Pete at 2 p.m. Sunday, April 15, in Edwards Auditorium at the University of Rhode Island. A reception will follow at the University Club.
Posted by G. Wayne Miller at 5:19 PM No comments: 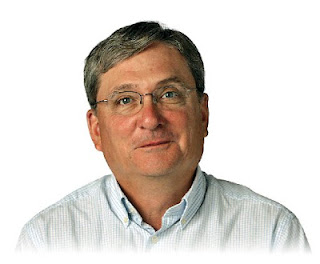 RIP, Pete Lord, friend and colleague of all of us at The Providence Journal. Pete died this afternoon after almost 11 months of trying to beat brain cancer. His family was with him. Pete was one of the best, quite simply. I can't find any more words right now...
Posted by G. Wayne Miller at 4:28 PM No comments: