As of Jan. 31, 2021, we have broadcast 201 episodes featuring 206 guests, a handful of whom have been repeat guests. Writers, filmmakers, scholars, still photographers, musicians, artists, poets, advocates and activists, physicians, journalists, Nobel Prize winners and an Academy Award nominee, people living with mental illness, politicians -- really, storytellers from pretty much every walk of life.
We tape virtually now during the pandemic but our hallmark remains great guests. As always, Jim and I thank them, our audience, and our crew at our flagship station, Rhode Island PBS. Onward!

AND HERE'S THE STORY BEHIND STORY!

Four years ago on Tuesday, January 3, 2017, Jim Ludes and I walked into 50 Park Lane in Providence, Rhode Island, home of Rhode IslandPBS. We were about to tape the first two episodes of a new weekly RIPBS TV and SiriusXM Radio show, “Story in the Public Square.”


Jim and I still joke about how we had no clue what we were doing. Our guests always laugh hearing that, but it was true: we really had no clue. We’d both been on TV before, but never as co-hosts and co-producers of a half-hour show that would air every week. Never as two people committed to producing 48 original episodes every year... or as long as the ratings allowed us. Yikes!

What we did have was a custom-built set, courtesy of TV veteran John Methia. At Salve Regina University's Pell Center, which Jim directs, we had events and office manager Teresa Haas and communications head Gianna Gerace. We had the support of The Providence Journal, partner with the Pell Center in the Story in the Public Square program. And we had then-program director David Marseglia, director Scott Saracen, editor Nick Moraites, and a production crew including Andrew Vanasse, Mark Smith, Andrew Gannon, Dewey Raposo and Joe Brathwaite. Plus makeup artists Allison Barbera and Jennifer Colleen Smith. 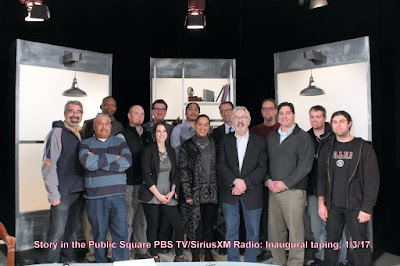 All true talents. Most are still with us, with Cherie O’Rourke now handling the direction and Erin Barry managing communications, with RIPBS Detector of Production Kim Keough keeping watch over all.

Still, three years ago Jim and I basically jumped off a cliff with no guarantee we would break only the proverbial leg. We had not rehearsed, unless you count the eight episodes we’d taped in 2016 as guest hosts on Llewellyn King’s “White House Chronicle.”


I guess those episodes did help, for our two inaugural shows -- with Naval War College professor Tom Nichols and Native Americans Loren Spears and Christian Hopkins -- were winners, and no real credit to Jim and me. Starting with Tom, Loren and Christian, we learned that beyond our crew and support staff, our guests would make (or break) the show.

And, boy, have they ever made it!

They are among the reasons we prevailed in a highly competitive process to advance from regional to national distribution, which began in September 2018. Today, the series is broadcast in 82% of all U.S. markets, with 476 weekly airings. It is available in 22 of the top 25 markets, 44 of the top 50 markets and 87 of the top 100. And for that, more gratitude, to DeShields Associates, Inc., our ace station-relations management firm, headed by Robyn De Shields and including Paul Malkie.

As of this writing, nearly 150 guests have appeared on “Story in the Public Square.”

They include scholars, filmmakers, still photographers, artists, poets, playwrights, editorial cartoonists, a video gamer, an astrophysicist, neuroscientists, economists, lawyers, podcasters, a theologian, novelists, physicians, musicians, non-fiction authors, journalists, a Civil Rights legend, people living with mental illness, a former Secretary of State, educators, a former national Security Advisor, the Afghanistan ambassador to the U.N., a Naval War College president and others. Many Pulitzer and Emmy winners, and an Academy Award nominee, have been our guests. They have brought regional, national and international perspectives. Those politically inclined have come to us from the right, left and center. All are welcome on Story. 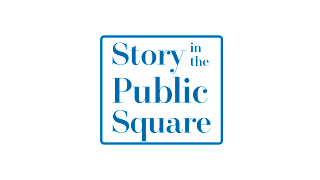 As Jim says at the beginning of every show, “each week we talk about big issues with great guests.” They suit the overall mission of the Story program, which from the start, eight years ago in February, has been “to study, celebrate, and tell stories that matter.” We return to the studio on Jan. 7 to start our 2020 recordings. All this year, you can again expect more fabulous guests!

Miss a broadcast? Every episode of “Story in the Public Square” is uploaded after airing to our YouTube channel. Each is available as a podcast on the Show Page, iTunes, Spotify, Google Play, Google Podcast, TuneIn, and Stitcher.

And, yes, I regularly write the “Inside Story” column for The Providence Journal. With projo podcasts.

It is a tribute to everyone involved in “Story,” on or off-air, that we have won two Telly Awards, the Newport Historical Society’s inaugural History Starts Here Award, and the 2018 Leaders as Hosts award from Leadership Rhode Island.

As we head into Year Four of “Story in the Public Square,” let me share what may be the real secret to our success: the fact that we co-hosts and our crew, guests and everyone else involved love this thing. We talk. We listen. We learn. When appropriate, we have fun, sometimes a lot of it, on-camera and off. A special nod to Mark Smith, who brings music and the best humor to our time in the studio.

Our hope is that we help advance the common good at a time in the history of the nation and world when understanding and public discourse are needed more than ever.

Let me close with mention of a tradition that began on that first day three years ago: our request that guests bring a token which we would add to our set, becoming a permanent remembrance of their appearances. Pretty much everyone has. It's a large collection now and growing with every taping: books, newspapers, drawings, hats, and more. The first two? A beautiful Native American dreamcatcher that Loren Spears brought, and a copy of Tom Nichols' best-selling book, "The Death of Expertise," pictured below. 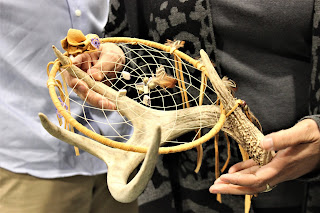 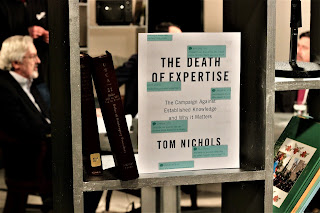