At #NECON38, a master class in the art of writing a ghost story

PORTSMOUTH, R.I. — A panel of distinguished horror writers on Saturday presented a master class on the art of penning the modern ghost story, whose roots lie in antiquity and, more recently in America, in the works of Washington Irving, Edgar Allan Poe and Rhode Island’s own H.P. Lovecraft.

And what better venue for such a class than Camp NECON, formally the Northeastern Writer’s Conference? The annual gathering was founded in 1980 by the late Bob Booth of Pawtucket and is run still by his wife, Mary, and their two children, Dan and Sara.

Unlike the time-honored but relatively straightforward zombie and vampire, said novelist John Foster, one of seven on the NECON “BOO!” panel, “the ghost presents more of a mystery.” More left to the imagination, according to Foster — more “the rustling of the leaves, or the wind, or ‘why is the door open?’ ”

Never reveal too much, advised Tom Deady, a Bram Stoker Award winner from Massachusetts. “The biggest fear is going to be created in your own head,” Deady said.

Something that Stephen King, the most successful horror writer of all time and a NECON attendee in the early days, back when he was no household name, would surely also advise.

Another good rule of thumb? “Give them something different,” said Tony Tremblay, editor and novelist. Avoid the clichéd, the hackneyed and the tired old formula. “Change it up,” Tremblay said. “That’s the easiest way to not make it stupid.”

So can a writer’s own bloodlines, as it were, opined Michael Rowe, the Canadian novelist, journalist and longtime critic for Fangoria, the horror-film magazine. “We carry ghosts with us because we carry our past with us,” said Rowe. “We carry our family with us.”

Sheri Sebastian-Gabriel, a feminist horror writer from New Jersey, brought the audience into the psychology behind the allure of the ghost story: the ancient human desire to learn what lies beyond physical death.

“I think human beings are innately curious about what happens after,” Sebastian-Gabriel said. “Even if you believe we are worm food, there’s still a spark of curioisty about ‘what if not’ ” – what then?

And maybe it all boils down to the child inside the adult — the kid afraid of the dark who, paradoxically, craves knowing what really is out there.

“Part of us wants to be that little kid,” said panel moderator P.D. Cacek, another Bram Stoker-winner and Pennsylvania resident. “We want to believe. We want to be scared.”

Bob Booth, who died in 2013, founded NECON after chairing the 1979 World Fantasy Convention, held at Providence’s Biltmore Hotel and featuring a writer from Maine who was still then largely unknown, Mr. King. This weekend’s NECON, at the Roger Williams University Baypoint Inn and Conference Center, was another sellout, with 225 attendees. Panels, receptions, art and book displays, and a lot of socializing characterize the NECON experience. 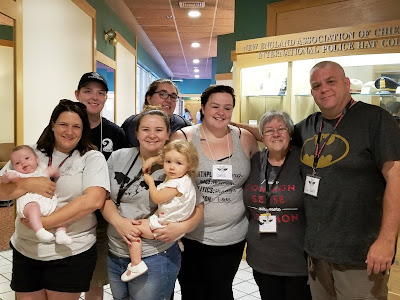 Booth’s wife and children took a moment Saturday to remember the founder.

“He’d be delighted,” son Dan told The Journal. “He had two biological children and this was his baby, too. He loved it.”

Said daughter Sara: “We’ve continued on a tradition that he was quite proud of. It’s still alive and well with the people he brought into the fold when it first began and newer members that just get it and have become part of our family.”

Said Bob’s wife, Mary, welling up: “I think he’d be very proud to see that his children have carried on his wishes. Everything is going the way he envisioned.”