The 2019 Story of the Year. Watch on PBS. Hear on SiriusXM Radio. Listen to the podcast.

Each year since 2013, the Pell Center has announced the public narrative that has made the biggest impact on public affairs in the previous twelve months. This year, “Story in the Public Square” co-hosts Jim Ludes and G. Wayne Miller agree the 2019 Story of the Year is not a single story, but a greater phenomenon: “The fracturing of America’s public narrative.” But there was plenty of competition, and this week’s guest, Brown University professor of sociology and international and public affairs Michael Kennedy, joins us as we break down a momentous year in the U.S. and abroad.


Takeaway One: As different as they may seem, the many popular protests in the U.S. and around the globe in 2019 reflect a universal theme.

And that, Kennedy said, is “a struggle for dignity, and a struggle for community… and also a common struggle against a system that impoverishes and endangers us. The system in which we live may not survive, and it's not because that system will die. It's because the planet can die.”

LISTEN TO THE PODCAST

Takeaway Two: Political right, left or center, climate change is “the connective tissue.”
“The environmental catastrophe, the ecological crisis in which we're living, is only going to get worse, so that is the connective tissue,” Kennedy said. “But not everyone sees that. So one of the things that I look at is Trump's supporters. They are profoundly alienated from the system. They look at the ‘deep state.’ They don't look at the deep ecological crisis, but they could because they see their communities being destroyed by environmental dangers. Instead, their attention is redirected elsewhere.” 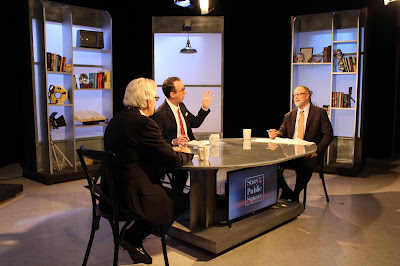 Takeaway Three: American foreign policy is in crisis.
“One of the things that I think that we ought to do at the end of 2019 is to take stock of where America is in the world,” Kennedy said. “ We may have improved our position vis-à-vis [Russian president Vladimir] Putin. We may have improved our position vis-à-vis [Turkey’s president Recep Tayyip] Erdogan by pulling out. And, in fact, this debacle of this withdrawal from northeastern Syria abandoning Kurdish allies this is a great gift to Putin and Erdogan because if you're a realist this is the evisceration of American influence in the Middle East.

“If you're a humanitarian, this is a disaster for all of these Kurdish peoples, and all democratically struggling aspiring people in the region. I'm ashamed of this policy in particular, but I'm also so distressed by what Trump has done to American foreign policy in terms of our experts, in terms of our State Department, and our security establishment. You can find so many stories in the press, and even the GOP doesn't want to talk about it because, in fact, they are also embarrassed, but they have to be beholden to the great leader.”

"Story in the Public Square,” a partnership of the Pell Center at Salve Regina University and The Providence Journal, a Gannett newspaper, airs on Rhode Island PBS in Rhode Island and southern Massachusetts on Sundays at 11 a.m. and is rebroadcast Thursdays at 7:30 p.m.; the coast-to-coast broadcast schedule is at http://bit.ly/34fathd An audio version airs 8:30 a.m. and 6:30 p.m. ET, Sundays at 4:30 a.m. and 11:30 p.m., on SiriusXM’s P.O.T.U.S. (Politics of the United States), Channel 124.

My Dad and Airplanes

Author's Note: I wrote this seven years ago, on the occasion of the tenth anniversary of my father's death. Like his memory, it has withstood the test of time. I have slightly updated it for today, December 11, 2020, the 18th anniversary of his death. Read the original here.

My Dad and Airplanes
by G. Wayne Miller

I live near an airport. Depending on wind direction and other variables, planes sometimes pass directly over my house as they climb into the sky. If I’m outside, I always look up, marveling at the wonder of flight. I’ve witnessed many amazing developments -- the end of the Cold War, the advent of the digital world, for example -- but except perhaps for space travel, which of course is rooted at Kitty Hawk, none can compare.

I also always think of my father, Roger L. Miller, who died 18 years ago today.

Dad was a boy on May 20, 1927, when Charles Lindbergh took off in a single-engine plane from a field near New York City. Thirty-three-and-a-half hours later, he landed in Paris. That boy from a small Massachusetts town who became my father was astounded, like people all over the world. Lindbergh’s pioneering Atlantic crossing inspired him to get into aviation, and he wanted to do big things, maybe captain a plane or even head an airline. But the Great Depression, which forced him from college, diminished that dream. He drove a school bus to pay for trade school, where he became an airplane mechanic, which was his job as a wartime Navy enlisted man and during his entire civilian career. On this modest salary, he and my mother raised a family, sacrificing material things they surely desired.

My father was a smart and gentle man, not prone to harsh judgment, fond of a joke, a lover of newspapers and gardening and birds, chickadees especially. He was robust until a stroke in his 80s sent him to a nursing home, but I never heard him complain during those final, decrepit years. The last time I saw him conscious, he was reading his beloved Boston Globe, his old reading glasses uneven on his nose, from a hospital bed. The morning sun was shining through the window and for a moment, I held the unrealistic hope that he would make it through this latest distress. He died four days later, quietly, I am told. I was not there.

Like others who have lost loved ones, there are conversations I never had with my Dad that I probably should have. But near the end, we did say we loved each other, which was rare (he was, after all, a Yankee). I smoothed his brow and kissed him goodbye.

So on this 17th anniversary, I have no deep regrets. But I do have two impossible wishes.

My first is that Dad could have heard my eulogy, which I began writing that morning by his hospital bed. It spoke of quiet wisdom he imparted to his children, and of the respect and affection family and others held for him. In his modest way, he would have liked to hear it, I bet, for such praise was scarce when he was alive. But that is not how the story goes. We die and leave only memories, a strictly one-way experience.

My second wish would be to tell Dad how his only son has fared in the last 18 years. I know he would have empathy for some bad times I went through and be proud that I made it. He would be happy that I found a woman I love, Yolanda, my wife now for four years and my best friend for more than a decade: someone, like him, who loves gardening and birds. He would be pleased that my three wonderful children, Rachel, Katy and Cal, are making their way in the world; and that he now has three great-granddaughters, Bella, Livvie and Viv, wonderful girls all. In his humble way, he would be honored to know how frequently I, my sister Mary Lynne and my children remember and miss him. He would be saddened to learn that my other sister, his younger daughter, Lynda, died in 2015. But that is not how the story goes, either. We send thoughts to the dead, but the experience is one-way. We treasure photographs, but they do not speak.

Lately, I have been poring through boxes of black-and-white prints handed down from Dad’s side of my family. I am lucky to have them, more so that they were taken in the pre-digital age -- for I can touch them, as the people captured in them surely themselves did so long ago. I can imagine what they might say, if in fact they could speak.

Some of the scenes are unfamiliar to me: sailboats on a bay, a stream in winter, a couple posing on a hill, the woman dressed in fur-trimmed coat. But I recognize the house, which my grandfather, for whom I am named, built with his farmer’s hands; the coal stove that still heated the kitchen when I visited as a child; the birdhouses and flower gardens, which my sweet grandmother lovingly tended. I recognize my father, my uncle and my aunts, just children then in the 1920s. I peer at Dad in these portraits (he seems always to be smiling!), and the resemblance to photos of me at that age is startling, though I suppose it should not be.

A plane will fly over my house today, I am certain. When it does, I will go outside and think of young Dad, amazed that someone had taken the controls of an airplane in America and stepped out in France. A boy with a smile, his life all ahead of him.