Two years ago today, on January 14, 2017, Story in the Public Square debuted. The first broadcast of our weekly show was with the audio version, on SiriusXM Satellite Radio – the popular P.O.T.U.S. (Politics of the United States), channel 124.

The TV debut, on Rhode Island PBS, was the next day, a Sunday, at 11 a.m., which remains our time slot today in the southeastern New England market (rebroadcasts Thursdays at 7:30 p.m.).

Since our debut, Story in the Public Square has won a Telly Award and, starting in September 2018, gone national -- now seen coast-to-coast in 22 of the top 25 U.S. markets, 43 of the top 50 markets and 79 percent of all U.S. markets. And co-host Jim Ludes and I have brought more than 100 storytellers to our audiences.

They come from the worlds of journalism, film, photography, academia, poetry, art, books, politics, medicine and more. Many have won national awards. All have informed and educated and many have also entertained -- and all have met our only request, to learn about their creative processes and how their stories impact public understanding and policy in America and the world. Jim and I listen more than talk. Story is about our guests and important issues, not us.

The roots of Story in the Public Square date to February 2012, when Jim and I met for coffee, which began a conversation that led to the founding of the Story program at Salve Regina University’s Pell Center, which Jim heads. A partnership with The Providence Journal, where I am a staff writer, was formed and remains to this day.

The old saw holds that it takes a village -- but it’s true, and our guests belong to that village; without them, we’d be little more than a couple more talking heads yammering about whatever. And there are many others who have helped build our show. An anniversary is an appropriate time to acknowledge them.

At Salve, President Sister Jane Gerety has been supportive from the start. Teresa Haas, Office & Events Manager at the Pell Center, keeps the trains rolling on time – almost literally, as many of our guests come up from New York. Communications chief Erin Demers masterfully handles our social media, press and more. She succeeds Gianna Gerace and before Gianna, Mia Lupo, who also once held those responsibilities.

At our flagship station, Rhode Island PBS, so many! David W. Piccerelli, Kim Keough, Scott Saracen, Lori Sullivan, Cherie O’Rourke, Nick Moraites, Mark Smith, Joe Brathwaite, Andrew Vanasse, Lynn Nardone Young are among them. And our set designer, John Methia. And two people no longer at RIPBS who were instrumental in getting us off the ground: Dave Marseglia and Kathryn Larsen, Senior Director of Broadcasting for Radio and Television at WNED in Buffalo.

The broadcast beginnings of Story in the Public Square can be traced to the nine episodes Jim and I did as guest hosts in 2016 for White House Chronicle, hosted by Llewellyn King and Linda Gasparello. Thanks to them, and our guests on those episodes.

And finally, thanks to our great hair and makeup team, Allison Barbera and Jennifer Colleen Smith.

That first broadcast, BTW, was “The Death of Expertise” author, Naval War College professor and Harvard Extension School teacher Tom Nichols. We taped him on the same day as Native Americans Loren Spears, head of the Tomaquag Museum, and Christian Hopkins, a Standing Rock activist. They were the guests on the second week of our show, broadcasts the weekend of January 21, 2017.

These three set the tone for all that has followed. Gracias.

We invite you to tune in during 2019, as we begin our third year on the radio and the telly. More great guests…

Hosted by Jim Ludes, Executive Director of the Pell Center at Salve Regina University, and G. Wayne Miller, senior staff writer at The Providence Journal, “Story in the Public Square” features interviews with today’s best print, screen, music, and other storytellers about their creative processes and how their stories impact public understanding and policy.
“We’ve been fortunate to have a great relationship with SiriusXM since we began production in 2017,” said Ludes. “We’ve reached an audience of people who care passionately about the issues and we’re excited to continue broadcasting on P.O.T.U.S in 2019.”

“The heart of ‘Story in the Public Square,’ is the guests we welcome each week,” said Miller. “Their stories, their analysis, their insights about public life and the human experience make the show what it is—and we have some great guests already lined up for the new year.”

The audio version of “Story in the Public Square” airs Saturdays at 8:30 a.m. & 6:30 p.m. ET, and Sundays at 4:30 a.m. & 11:30 p.m. ET on SiriusXM’s popular P.O.T.U.S. (Politics of the United States), channel 124.  Episodes are also broadcast each week on public television stations across the United States. In Rhode Island and southeastern New England, the show is broadcast on Rhode Island PBS on Sundays at 11 a.m. and is rebroadcast Thursdays at 7:30 p.m.  A full listing of the national television distribution, is available at this link.

“Story in the Public Square” is a partnership between the Pell Center and The Providence Journal. The initiative aims to study, celebrate, and tell stories that matter.

First published in 1829, The Providence Journal is the oldest continuously published daily newspaper in the United States.

For more information about Story in the Public Square, please visit http://pellcenter.org/story-in-the-public-square/.
Posted by G. Wayne Miller at 2:22 PM No comments:

Happy New Year! I hope 2019 holds blessings for all. I have expressed my personal wishes elsewhere. This is my professional greeting.

The first is the 30th anniversary of the publication of my first book, the horror novel “Thunder Rise” (horror/sci-fi/mystery is another of my writing lives) God willing and the creek don’t rise (you Irish folks can appreciate that), I’ll post more about the book that began my author career come September, 30 years (gasp) after “Thunder Rise”  landed on shelves.

The second is far more recent: the two-year anniversary of the debut of Story in the Public Square, the weekly and since September 2018 the national PBS and SiriusXM Satellite Radio show that I co-host and co-host with my good friend Jim Ludes.

The maiden Story broadcast, on January 14, 2017, featured Tom Nichols, of the Naval War College. Tom was the first of more than 40 authors who have appeared on our weekly show (with many more lined up for 2019). Many of these individuals wear other hats, but they are authors and they know that entering the authorial world is a milestone made possible only by means of dedication, discipline and old-fashioned elbow grease that anyone who has worked hard to achieve in any field understands. 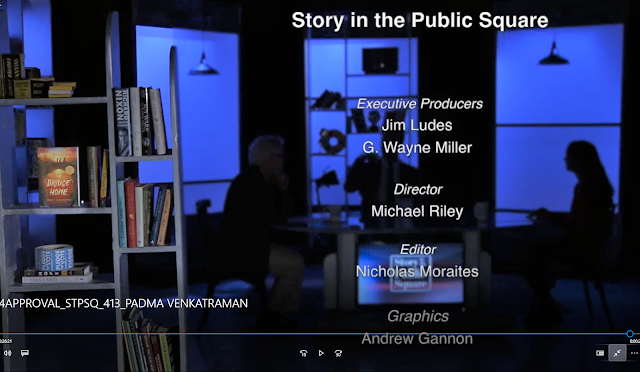 Having myself passed that milestone 30 years ago and having never stopped writing books – it becomes a nagging part of your DNA – you fellow authors know whereof I speak! -- I began to support and encourage others who aspired to be published, or already were.

I did my best to park my ego at the door and mentor, applaud or listen to others I knew or who sought my counsel. Except for the readings and appearances, writing books is a lonely and frequently fruitless passion (think: trunk novel). It helps to have someone in your corner who has experienced the allure and frustration of the blank page -- and the magic of the filled.

So we have made a home for authors on Story in the Public Square. They come to us from Rhode Island and around the country, and from houses including Simon & Schuster, PublicAffairs, Penguin Random House and Harper Collins, and many university and niche presses.

Some are friends and former Providence Journal colleagues: Dan Barry and C.J. Chivers of The New York Times, and Kevin Sullivan, who co-authors with his wife and fellow Washington Post writer Mary Jordan. But most are people I had never met, except on the page, until they journeyed to our flagship station, Rhode Island PBS, to go before the camera.

In random order, these authors (in addition to Barry, Jordan, Sullivan and Chivers) have appeared on episodes of Story in the Public Square:

Thanks to our Story authors, and may 2019 bring more wonderful words from all of you!
You can learn more about Story authors – and the full list of all of our guests and links to their appearances -- at https://pellcenter.org/story-in-the-public-square/episodes/