November 6, 2019, at the Providence Community Library’s Olneyville branch. I moderated a panel of four speakers (including me!).

Thank you, Joseph, and welcome everyone to the New England First Amendment Coalition’s continuing community conversation. Thanks to the Providence Community Library’s Olneyville branch for hosting us.
At a moment when many governments at the local, state and national levels are emboldened to restrict or deny access to what should be public records – when politicians in Washington and elsewhere spew nonsense about so-called “fake news: and call journalist “enemies of the people” – when the bedrock principle of truth is derided by some – no topic could be more timely and important than the “First Amendment and the Free Press.”
Before we begin, I thought it appropriate to read the First Amendment, which Congress adopted as one of the ten provisions of The Bill of Rights:
“Congress shall make no law respecting an establishment of religion, or prohibiting the free exercise thereof; or abridging the freedom of speech, or of the press; or the right of the people peaceably to assemble, and to petition the Government for a redress of grievances.”
I think we can all agree that this one incredible sentence – as relevant today as 230 years ago, when James Madison wrote it -- is a cornerstone of American democracy. And yet, it seems increasingly under attack. 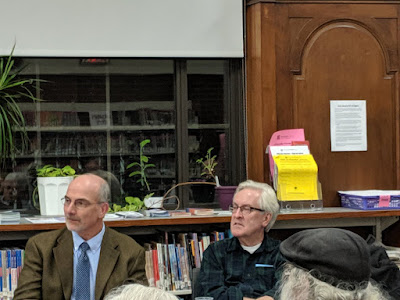 So I think we can expect a lively discussion tonight built around questions from the audience. Now. let me introduce my fellow panelists.
Tom Mooney has covered many of the biggest stories in Rhode Island for more than 30 years for The Providence Journal: from calamities, crime, courts and corruption to slice of life features and special projects. He's investigated failings within the DCYF and the money and players behind the booming marijuana business. Earlier this year he wrote a series of stories about agencies that routinely deny access to public records and violate the open meetings law. For 14 years he's also taught journalism at Brown University.

Steph Machado is a Target 12 investigative reporter for WPRI 12, holding government officials accountable at Providence City Hall and the Rhode Island State House. She has worked at WPRI TV, Channel 12, since 2015, and was previously a State House reporter in Vermont. A graduate of the Newhouse School at Syracuse University, Steph on her web site notes that she specializes in digital journalism, too, and is “a storyteller at heart.”
Steven Brown is executive director of the American Civil Liberties Union of Rhode Island, and has served in that capacity for over thirty years. During that time, the state ACLU has filed over 600 lawsuits covering a broad range of civil liberties and constitutional issues, including dozens of cases vindicating the public's rights under the First Amendment and the Access to Public Records Act. Before coming to Rhode Island, he was executive director of the Iowa Civil Liberties Union and he worked at the Philadelphia ACLU.
Steve, maybe you can get us started with your overall assessment of access to public records that residents of Rhode Island have – or don’t – at the end of 2019.