#33Stories
No. 3: “Since the Sky Blew Off”
Context at the end of this excerpt.
Other entries in #33Stories at the Table of Contents. See you tomorrow! 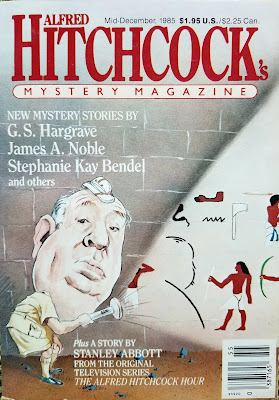 A passage from “Since the Sky Blew Off”:

Mather was correct on the offspring issue, of course. He'd been correct on every issue since he took charge two years ago when the sky blew off, the crops started wilting, and the world's population started dying by the hundreds of millions.

It was summer, the summer of my twenty–seventh year, and it had been the most glorious summer of my life. We were living in New York, then, all of us, living in style and with more than our fair share of creature comforts in an upper West Side neighborhood that only recently had been gentrified. We were the brie–chablis crowd, the folks with the MBA's and the designer bathrooms who spent weekends on Cape Cod and February vacations in Aspen. There wasn't a one of us who wasn't making fifty grand then, minimum, not a one of us who wasn't employed with one of Wall Street's or Madison Avenue's most reputable firms.

Was it the Soviets, us, or some third party? I don't know if anyone anywhere ever really learned the answer to that question, not at the beginning, when the only effects were those amazing Technicolor sunsets and that crazy shift in the jet–stream, or, later on, when political institutions and economies were disintegrating faster than global temperatures and the seas were rising. In the early days, when the presses still ran and the six o'clock news was still being broadcast, there was all sorts of talk that it had been the test of some new thermonuclear weapon – more frightening and more secret than the Bomb, which had every true–blooded Yuppie doing flips back then.

I have to believe the guy upstairs has a pretty mean streak of irony because that wasn't it by a long shot. There was no big bang, no escalation of crisis, no state of alert, no Warsaw Pact troops marching across Germany, no Colonel Khadafy dropping a surprise on Israel – just a sky the color of fresh blood the evening of July twenty–sixth.

Maybe the Martians landed in a Kansas cornfield and decided to zap ninety–five percent of the human race, just for kicks.

Whatever it was, it silently and quickly burned off half the upper atmosphere, leaving plants to die, food chains to be disrupted and destroyed.

We didn't know how bad it had really been until it turned winter, and winter brought no dirty snow on Fifth Avenue, no frost on Macy's windows, no skating in Central Park, no temperatures lower than the sixties, not even in January or February.

By spring, the hospitals and doctors were overloaded with skin–cancer cases and people whose vision was fading away to darkness.

By summer, the effects of the failed wheat and corn crops were filtering down, and grocery stores experienced their first shortages.

By fall, there was rioting and looting, and the cities began to burn. Police and the National Guard controlled some of it, at first, but then the panic set in. When it did, the authorities put down their weapons and ran.

By the next winter, starvation was coast–to–coast and the typhus had gone wild.

It was, of course, Mather's idea to leave New York. Right from the start, everything had been Mather's idea. We got out of the city in June, before the real panic hit, and we headed up the Connecticut coast. There was still gas left, although there were shortages and growing lines at the stations, so we drove, charging up a storm on our American Express and Visa cards as we went.

Mostly, we traveled by night, holing up during the daylight hours in cheap motels. When we did have to go outside, no matter how briefly, Mather made sure we wore sunglasses and painted ourselves with sunscreen, protection factor fifteen. Eventually there was a run on sunscreen and finally supplies dried up, but Mather had been smart enough to buy cases of it before John Q. Public fully realized what was going on. He'd done the same thing with penicillin and guns, so we were okay on those fronts, too.

We were in Boston when the fabric of American society began to dissolve, slowly but completely, like a cube of sugar in water. It was September, the hottest September ever recorded by the National Weather Service, and no one any longer had any doubt what was happening.

Mather had decided to put down roots, at least until we could figure out what the long–term plan would be. After disposing of a gang of winos, we'd made our home in an abandoned subway tunnel near Park Street Station, which is almost directly under City Hall. From a defensive perspective, the tunnel was a dream – only one entrance, which we kept clear with occasional firefights. From the survival point of view, it gave us decent access to stores and warehouses, particularly those mammoth ones along the waterfront, which were still stocked weeks after everything else ran out. The day the looting began in earnest, we grabbed enough canned juices and beef stew and hams for at least a year, according to Mather's calculations.

It was a sickening scene we found when the Great Fire finally forced us to the surface. Bodies strewn everywhere, smoldering or just plain rotting, every one of them guaranteed to be harboring enough disease to wipe us out a thousand times over. Immediately Mather decided to head north, where, he said, we would have the best chance of establishing a camp. We passed other bands as we walked, and we had some skirmishes, losing two of our original group in the process.

Now the big threat was roamers…

At the moment, the origin of the roamers wasn't the issue. The point was Pete's reaction.
"I can't do it, Russ," he whispered. "There's been too much already."

I looked at him, his profile expanding and shrinking in the campfire's glow. I looked at him long and hard, but I can't say that I was surprised. Mather and I had had a private talk about him just before leaving.

"Don't stare at me like that," he said, "like I'm a criminal. I've been thinking about it for weeks. Mather's crazy on this. Paranoid. Can't you see it? There's no need for this, Russ. No need."

"What do you suggest then?" I said, calmly.

Below us, an infant started to cry. The night took that cry, twisted and deformed it, made it ghostlike and disembodied. Both of us were silent for a moment.

"What's your idea?" I repeated.

"That we button up and go back home. Forget them."

"And what about when Mather sees smoke tomorrow morning?"

"There wouldn't have to be any smoke," he said after a moment. "We could tell them to move on. They could be over the border in New York State by daybreak. It can be our little secret, Russ. You and me. Mather need never know."

Finally, I gave in.

"Thanks," he said. "Really, thanks. And, listen: Mather will never know."

Pete started for the stairs. "Don't you think you ought to leave your shotgun here?" I asked. "Wouldn't want to create the wrong impression.

"Sure. Right." He handed his weapon to me and headed down the loft.

"Any hesitation," Mather had said during our private chat, "and you have my full and complete authorization."

I waited until Pete had reached the campfire. Then I shot him through the back. The noise was startling, but before anyone down there could react much, I emptied the shotgun in their direction eight times. In fifteen seconds, it was over. On my way out of the barn, I was lucky – I found a five–gallon can of gas, and it was full. I poured the gas over the bodies, stepped back, and tossed a coal from the campfire. It went up with a roar.

Alfred Hitchcock’s Mystery Magazine published the dystopian story “Since the Sky Blew Off” in its edition of mid-December 1985. The magazine was print-only then, needless to say, and I remember buying a copy (actually, several!) from a newsstand on Dorrance Street, Providence, not far from the Biltmore Hotel.

This was a huge honor for me – published since 1956, when the man for whom it is named was at the height of his cinematic career, AHMM featured work by such luminaries as Donald Westlake, Ed McBain, Robert Bloch, Elisabeth Sanxay Holding, Jack Ritchie, and Ed Hoch. It won many awards. At the age of 31, I felt like I had arrived! 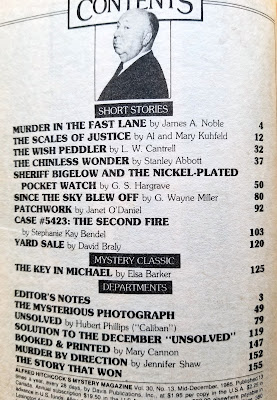 Unlike Mike Shayne Mystery Magazine, AHMM is still published, I am pleased to report – published in print and online editions. “The finest in crime and suspense short fiction" is its motto, and that says it all.

“Since the Sky Blew Off” was republished in 1986 in Band 184 of Alfred Hitchcock’s Kriminalmagazin, the German edition, with the translated title “Seit der Himmel gebrannt hatte” – my first foreign sale! 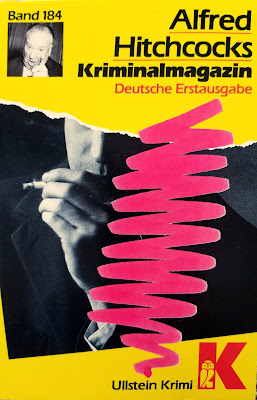 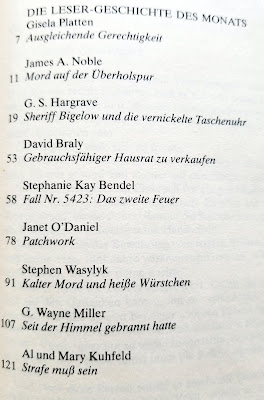 I followed the sale of “Since the Sky Blew Off” with another sale to AHMM: “To Be Cold, Like Trees,” another dystopian tale published in July 1987.

But “Sky” proved inspiration for a number of screen treatments I later write with my fabulous screenwriting partner, Drew Smith. One, which you will see on May 18, contains perhaps my favorite fictional character: Birdman. That also happened to be my nickname in grammar school – Birdie for short – but how I earned that is a story for another time, and best told over a beer...

The story also was the title selection in my first collection of short stories published by Crossroad Press. You can read it all there, along with “To Be Cold, Like Trees” and 10 others.