Traces of Mary: Read the reviews, order the book! 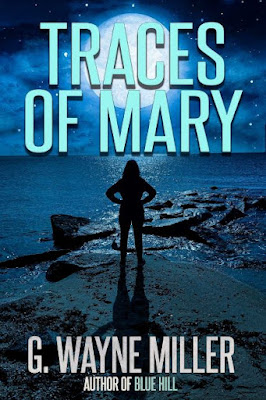 Despite carrying the scars of childhood trauma, Mary McAllister has enjoyed a successful career and become the mother of two wonderful children. Then their deadbeat father leaves, her young daughter dies, and she is hospitalized in a psychiatric center as she seeks to recover from this devastating loss. But she is not the same when she is released—and during escalating periods of crisis, she claims to be possessed by Z-DA, an evil creature from a distant galaxy that has come to earth in a war almost as old as the universe itself with Ordo, leader of a good species.

Is this real, or only extreme psychosis? Is Mary's young son, Billy, really Theus, the First Lieutenant for Ordo, as she increasingly believes? Is Billy's dead sister, Jessica, really reaching out to her brother for help in freeing her from the dark and distant place where she is trapped? As a city is engulfed in mayhem, events race toward a stunning conclusion in Traces of Mary, a one-of-a-kind mix of horror, science-fiction, thriller and mystery by best-selling author G. Wayne Miller.

ORDER "TRACES OF MARY" ON AMAZON

THE LATEST REVIEWS:
“ ‘Traces of Mary’ is a bold, bracing, blisteringly original hybrid tale that reads like Stephen King on steroids. G. Wayne Miller has penned a wild, psychedelic mind-bender of a book that challenges our sensibilities even as it hops across multiple genres with skill and aplomb. Call it horror, science fiction, mystery, thriller, or anything else you want, so long as you call it your next must-read.”
-- Jon Land, USA Today bestselling author.
“Strap yourself in for an intergalactic joy ride with Billy McAllister, the most engaging boy since Harry Potter, and a supporting cast starring his newly dead sister, Jess; his possessed mother, Mary; his uncle, Father John Lambert, a Jesuit priest; and a stuffed animal named Baby Bear. Throw in the evil Z-Da who is trying to kill Ordo, the leader of the Priscillas from a distant galaxy, Ordonia, and you’re in for a rare treat with ‘Traces of Mary.’ ”
-- Barbara Roberts, physician and author.
“This big-hearted novel follows an endearing 11-year-old boy who must navigate his mother's harsh reality of poverty, grief and mental illness. Along the way he discovers a place where resilience and faith are rewarded, where the miseries of the real world can be overpowered by the benevolence of a fantastical universe.”
-- Mark Johnson, Pulitzer Prize-winning journalist and author.
"Traces of Mary has everything you could ever want in a book. A seamless blend of science fiction and horror,  it’s chock-full of action and mystery and scenes that will make you turn up the lights and check the locks. Best of all, it’s got heart and compassion and living, breathing characters you’ll come to love. This novel is a treasure."
-- Paul F. Olson, World Fantasy Award Nominated Author of Alexander’s Song and Whispered Echoes
“Supernatural horror? Check. Cosmic horror? Check. Science-fiction horror and childhood horror and psychological and religious and chemical horror? That's G. Wayne Miller's gripping Traces of Mary. Bonus: Billy, kid protagonist who is not a Harvard professor in kid skin. Bonus #2: Father Jack character, a Catholic priest who is neither a bumbler nor a perv. Flat-out, Traces of Mary is a five-star page-turner and a book to be remembered long after that last page.”
-- Mort Castle, Bram Stoker winner and best-selling horror author.
"Traces of Mary is genre-blending in all the best ways, taking twists from thrillers, creativity from sci-fi, darkness from horror and heart found in any great fiction. Do not miss another fantastic tale well told by G. Wayne Miller."
--Vanessa Lillie, bestselling author of Little Voices and For the Best
“G. Wayne Miller’s latest book is a complex, cross-genre tale of mystery and horror. Traces of Mary draws the reader into a dark world, both painfully realistic and fantastical, and doesn’t let go.  Full of suspense and humor, it will keep you guessing until the very end.”
-- Jan Brogan, author of “The Combat Zone: Murder, Race and Boston’s Struggle for Justice”; “A Confidential Source”; and the Hallie Ahern mystery series.
“G. Wayne Miller has given the world a diversity of wonderful books, bestsellers that captivate, inform and otherwise transport his readers to new worlds. With Traces of Mary, Miller again dips his talented pen into the ink of imagination, giving readers a bold, immersive story that will captivate, thrill and thoroughly entrance.
“With a cast of memorable characters enriching his detailed storyline, Miller anchors Traces of Mary with Mary McAllister, a mother of two who is plunged into a chaos that challenges her very core. Miller fills this story with people of dimension and believability, as he swiftly unfurls the action through scene development and snappy, concise dialogue. Each character quickly comes to vibrant life and each scene ties into the overall arc of this tale. Readers will appreciate the depth of untold backstory giving this novel a deliciously rich, environmental context. Miller’s gift for creating a cinematic flow is marvelously alive in Traces of Mary. Traces of Mary crackles with other-worldly suspense. A storytelling gem.”
-- John Busbee, founder and producer of The Culture Buzz, Iowa’s independent cultural voice, for KFMG 98.9 FM, Des Moines, Iowa.
"The Legendary G. Wayne Miller has done it again! The mix of science fiction with psychological terror is the perfect match for this sublime story!"
-- Mark Slade, author, podcaster and anthologist.
"G. Wayne Miller's prose is electric in this genre-bending, mind-boggling, and devilishly good horror novel."
-- Ksenia Murray, Author of “The Cave”
“Perhaps it is his history as a reporter, or his investigative non-fiction, but either way, G. Wayne Miller has a way of delivering a suspenseful crime story with believable reality and scope. He leaves it to the readers to decide if the looming conclusion is paranormal or a natural horror, but by the end of ‘Traces for Mary,’ you will be at the edge of your seat.”
-- Chauncey Haworth, radio show host, podcaster and writer.