#33Stories
No. 17: “Snyder,” a screenplay with Drew Smith and Drake Witham
Context at the end of this excerpt.
Other entries in #33Stories at the Table of Contents. See you tomorrow!
Writers Guild of American registration no. 1184318 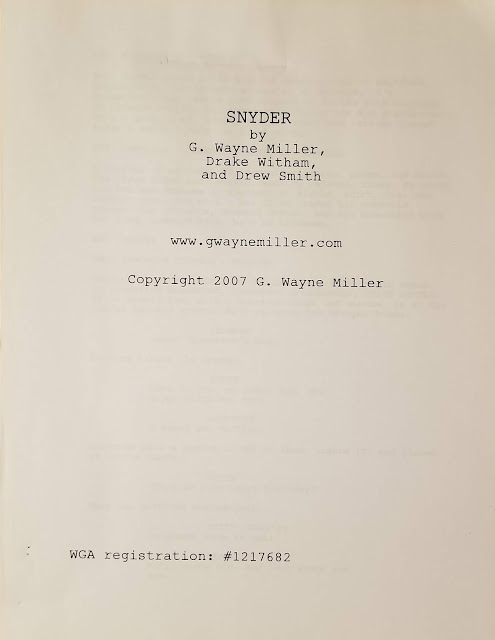 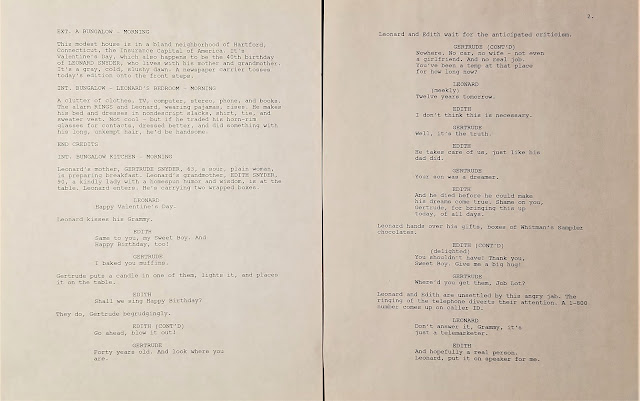 Near the beginning of the screenplay:

LEONARD is back in the rat maze of cubicles, coffee cups and broken dreams. He’s getting an earful from an irate customer, simmering.


LEONARD
Yes, I understand that you’re frustrated.
Well I do think there’s uh, hey I don’t
think that language is necessary…

Close up on Leonard as we see his getting red. The caller’s ranting is indistinct except for the phrase “you lousy motherfucker!”


LEONARD
That’s Uncalled for. No, NO I’VE
SPENT TEN MINUTES LISTENING TO YOUR
FEEBLE BRAIN FORM FOUL-MOUTHED INSULTS
AND NOW YOU WILL LISTEN TO ME.

LEONARD catches himself. Realizes he’s already gone too far, might as well finish with a bang.


LEONARD (Cont’d)
How dare you bring anyone’s mother
into this? I will have you know that
not only am I not lousy but your mother
was quite pleased and the only reason
I haven’t been back is that her RATES
ARE MUCH TOO HIGH! Good Day, sir.

LEONARD slams the phone down only to see red light blinking, another call is waiting. He sighs and answers.


LEONARD
Customer Service. Can I help you?
(beat)
Well that’s an interesting insult to open a conversation with a complete stranger. Listen up you MORON, the next time you want take out anger by screaming
at someone you don’t know or kick a dog or,
or well,, just don’t. Instead walk up to a nearby wall and bang your head repeatedly.
I’m NOT FINISHED YET. Bang your head until
you either pass out or you see enough of
your own blood that you can finger paint
this message – I’M A RUDE, SELF-IMPORTANT JACKASS!
I’ll send you a dictionary to help with the big words.

LEONARD hangs up and hears an applause from his co-workers but doesn’t turn the light is red again.


LEONARD
Who wants some customer service now?
(beat)
Oh I’m fine thank you. Thank you for
not asking, ma’am. May I call you ma’am?
Thank you for being just like every other barely literate fool who
has called over the past 17 years to dump your problems
on us… Hello?

LEONARD looks at the phone. Clearly the woman has hung up.


LEONARD
And then sometimes this job is easy.

Leonard is largely oblivious to the gathering crowd. SALLY is looking on but so is STELLA, the office busy body, PHIL, the suck-up, MARIA, the tart and WALLACE. He misses the gathering crowd ‘cause he notices that his co-worker FloReese is dealing with another pompous jerk. He also doesn’t see that the whole thing is being filmed.


FLOREESE
I can get you a manager, Miss but I’m
not sure why you have…

LEONARD
Give me that phone, FloReese.

Before she can give him the phone he grabs it from her.


LEONARD
Manager’s number? Sure I’ll give it to
you. I’ll give you his home number. Why
don’t you call him in the middle of the
night and see if he cares anymore than I
do. But before you make that call why don’t
you see if you can locate your daughter at
that hour before she repeats your doubtless mistake of filling
the world with illegitimate spawn. Oh, you know what we’re running a
special today on, on advice so I’ve got one
more for you – grab a pen. Start showing some
love for the people around you and maybe they won’t hate you and
then you won’t have to be
so nasty to everyone you encounter. Believe
it or not, we are trying to help. Hold for
the manager’s number and in the meantime why
don’t you apologize to FloReese?

Leonard hands the phone back to FloReese and sees that a crowd has gathered around. Some are shocked, some are in awe and some are squarely in his sights.

LEONARD
It’s really professional. Not real. Really.
But they probably didn’t teach much grammar
at busybody school. For once STOP STICKING
YOUR NOSE IN OTHER PEOPLE’s BUSINESS.

Some of them gasp, a few laugh, notably PHIL, the suck-up.


LEONARD
I don’t know what you’re laughing at Phil.
You’re better than anyone at sticking you’re little brown nose
all the way in. WHO WANTSSOME NOW?

Just then Al the boss walks around the corner.


AL
What are you serving up Leonard, more of
the vitriol you’ve been sharing with our customers.
You’re unstable, you’re unlikable and
you’re unemployable. Get your ass out of here.

LEONARD
I’ll be expecting a nice severance. But
since you’ve come all the way down to the
front lines for the first time in what…seven
years I’d like to tell you, fearless leader
that you have all the intelligence and
charisma of a fire hydrant. But I don’t even
think a dog would want to piss on your sorry
ass. Good Day, yes I said Good Day, Sir.

LEONARD begins to gather his things, when FloReese motions toward him.


LEONARD
Sorry about that call, FloReese.

FLOREESE
Not at all. It was my sister.

FLOREESE
She needed to hear it. Thank you Leonard.


Leonard walks out and the place erupts in applause.

Screenwriter Drew Smith and I have worked on many projects together, including the screen version of "King of Hearts" and a long-running collaboration, "The Memory Bank," variously titled "The Memory Bank" and "Since the Sky Blew Off," for my short story on which it is based.

Although we have come close, Drew and I have yet to see any of our collaborations hit the actual screen. We still have hope! But if you know anything about Hollywood, you understand that disappointment and heartache are a part of the game.

In "Snyder," we brought in my old friend Drake Witham, a former newspaper reporter who left the biz to pursue his dream of becoming a stand-up comic, which he did. We wrote "Snyder" in the early days of YouTube, but we had figured out, like many others, the power it would have. And so that is the beginning of the narrative arc of the script: "Loser" Leonard discovers a rare talent for stand-up, and a YouTube clip goes viral, catapulting the man onto the pages of Variety.

I still like this one. Thanks Drake and Drew (sounds like the name of a bad law firm!) for working on "Snyder." I had fun then, and reading it now pleases me still.